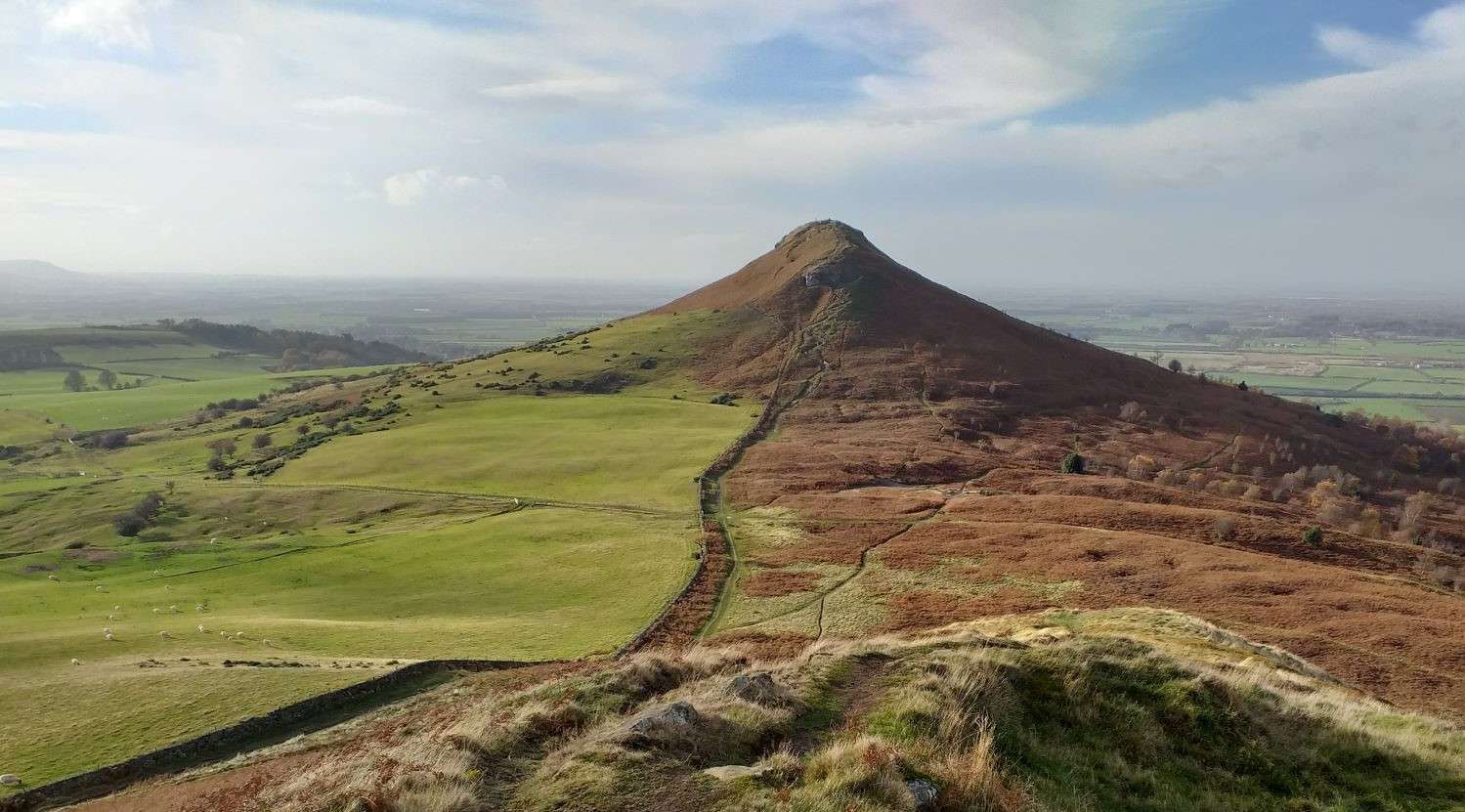 With the Hardmoors events as popular as they are nowadays, I’d pretty much forgotten that I’d signed up for the Roseberry HM way back in the bright summer months (better yet, forgotten that I was tempted to sign up for the longer distance of the full! These foolish thoughts we have!)

The morning of the race, I woke with a reluctance to get moving, too cold, too dark. Too anything to make an effort, winter really can bore off. Anyway, I made it up, shoved large amounts of porridge in my face, grabbed my kit and headed out the door.

Arriving at Guisborough, still not quite feeling the running love, we reluctantly piled into the sea cadet hall, only to be greeted by Tom and Claire Chapman at kit check with their enthusiasm, it was definitely a warm welcome. With numbers issued, we could only hang around (usually in the toilet queue), assure ourselves it could always be worse, and wait for the start.

Assembling outside, we awaited the starting gun and despite wanting to walk the first hill (oh yeah, no hanging around with this Hardmoors stuff – straight into the hill!), I somehow got carried away with the other runners and began to run. Up the hill an across the fields, there were bottlenecks as we stood around waiting and chatting to other runners, like we were on a lovely day out.

Trotting along at a decent pace, minding our own business, we then turned a corner to be confronted with the first challenge of the day. Ascending the muddy Tees Link hill. I can only liken what I experienced to running through thick chocolate icing on a cake. People were ‘attempting’ to find the best path through it, zig zagging across, using poles, walking, short bursts of running. Chatting to one lady on the way up, I mentioned that the coming down would be fun – she had no idea!

At the top of the Tees Link, there was small respite before straight up to Highcliffe Nab, which is steeper than the first bit, using 4 points of contact now instead of two. Once at the top, with it being a bright and sunny December day, we were rewarded with stunning views all round. It was windy too, but we ran off around the corner, leaving the poor marshals to be battered by the wind (Kudos to them of course, and it begs the question, who is the crazier – them, standing in the wind all day, or us, running it?)

Finally!! A nice bit of flat to stretch the legs and get a bit of running done, which was nice after the pretty robust warm up we’d just had. There were some pretty flat paving slabs along this way, before ascending up to run through some gorse bush, an exposed area where it really was best to keep running, for both warmth and in a bid to escape the wind. All the along this bit was a gentle elevation and then, there it was – Roseberry Topping, in all its 1000 ft of elevational glory! Our nemesis, for what I would imagine to be at least the next hour or so. First, a little descent to overcome, I find that I can’t run downhill without giggling away, or just making a noise in general, nerves I think, at the fact faceplanting is probably never far away.

Up Roseberry, down Roseberry, up Roseberry, down Roseberry. What more can I say? It was hard, it was tiring but it’s also incredibly satisfying to say that you’ve done it. The second ascent was hardest, mainly because it’s quite technical, the steps aren’t your regular kind of steps (of course they aren’t, we’re on a Hardmoors adventure, remember!) Coming down the other side was also tough, due to the jelly legs – I’m sure that’s how Lisa would explain away her little tumble on this part of the run!

Feeling like the most difficult part was over and done with, we ploughed on, back up and across to Captain Cook’s monument, it was nice to get some steady running in at this part, before another fairly steep gradient to the monument. The views were probably impressive, but we turned left and continued to run, as the wind was again battering the open, exposed area. Mentally, it felt like the hardest parts were behind us and it was now time for a gentle run back to the finish (albeit, another 6 or 7 miles away!) Gentle may be the wrong word, there were still some steep parts, of course. But we were able to continue steady away across the moorland, until we reached what had to be my favourite marshal spot, they had a tent up (not for us, unfortunately, the marshal’s had had such a tough day, one of them was having a snooze as we ran through), Christmas music was playing with decorations everywhere, and we got lots of encouragement that the end is, in fact, quite close. Running past here took us to Highcliffe Nab once again, where at this stage in the day and being back of the pack runners, it was probably going to be easier to pull out the waterproof jacket and make a sledge to travel down the hill, especially after it had been turned over by so many runners during the day. My turn to fall this time, and a double whammy, on the bum, bounced back up only to go skidding all over the place again. Well, it’s not a proper day out if you don’t end up covered in mud, eh? The Tees link was as muddy as first-time round, but so much more fun to run down than up!! I swear your trainers are less muddy if you just run fast through it – and it’s undeniably more enjoyable.

The last mile and a bit felt like a slog, but any race does when the end is in sight. But, the hill we set off up became the final treat of the day, a nice gentle run down and back into the cadet hall, to warmth and food. And the satisfaction that 3000ft of elevation with two trips up and down Roseberry Topping will definitely be earning you bragging rights until the next Hardmoors event.

← Race Report - Meanwood Valley Trail Race - 15 September 2018 Race Report - A Year of Master's Running (Part 1) →
We use cookies on our website to give you the most relevant experience by remembering your preferences and repeat visits. By clicking “Accept All”, you consent to the use of ALL the cookies. However, you may visit "Cookie Settings" to provide a controlled consent.
Cookie SettingsAccept All
Manage consent