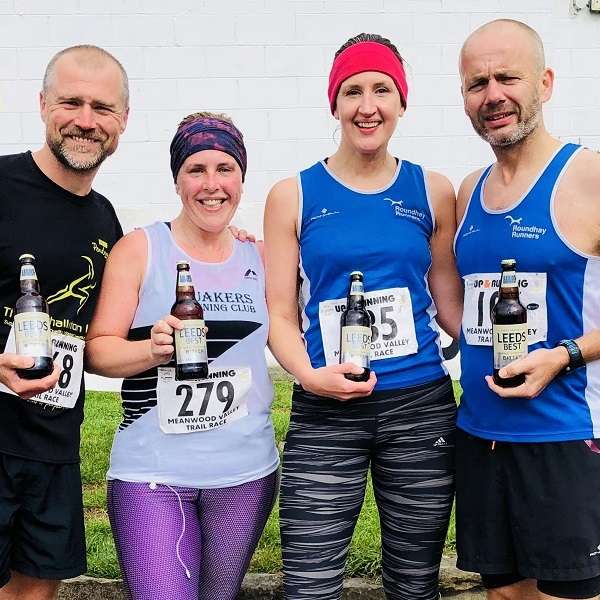 I entered the 21st (and apparently resurrected) Meanwood Valley Trail Race two days before I ran it. My sister lives in Leeds and you might be aware it was she who started me on the running thing when I was having a bit of a tough time. She would religiously drive to Darlington to drag me between two lamp posts, and when I could manage about eight lamp posts she told me to get myself to Leeds and we would go running. We did just that and I had run some of the route before. I remembered it from those early days.

The Valley Striders running club host the race and it really does chuck everything at you that you expect a good trail race to chuck at you.

The Meanwood Valley Trail (or MVT as the locals call it) is a footpath from Woodhouse Moor near Leeds City Centre to Golden Acre Park at Bramhope. This path forms the first 7 miles of the Dales Way long distance footpath from Leeds to Bowness-on-Windermere. The MVT Race uses parts of the Trail. It’s beautiful. I’m bias of course because it’s Yorkshire, but to say you are in a thriving city it really is something else.

We arrived at the start; Old Leo’s Rugby Club in Leeds to collect numbers. It was well organised but of course there was a huge loo queue, but when is there never!? Plenty of parking too which always makes it easier. The Race Director shuffled the 230 or so people to the start line which was just behind the club house – the atmosphere was really friendly and in my Quakers vest I was a lone representative of our club. My sister runs for Roundhay Runners so it was great to catch up with lots of her running buddies. 9.30am soon came around and off we went!

The route was about 7 and a half miles of almost all trail race terrain. We had long grass; tree routes; rough, undulating (in parts pretty steep to be honest) and sometimes narrow tracks and overgrown foliage. Boulders, low hanging branches and lots of leaves. There is a 100m stretch of road, that the route took us on twice, only really to allow us to make the only road crossing on the route. I reckon that at the southernmost point of the MVT we were less than 3 miles from Leeds City Centre, I momentarily thought of those who would be partaking in champagne cocktails in Harvey Nicks whilst I was dragging my backside up that one last incline! Instead I took on water at the station that was in Meanwood Park. About three and bit miles in. If you fancy giving this a go next year trail or fell shoes are a must. We were lucky that the course was mainly dry but I imagine after heavy rain it could include mega muddy patches.
The course was exceptionally well marshalled by Valley Strider members. They were absolutely fantastic. You never went more than 500m without seeing one, who cheered and hollered you up that hill, over that boulder, down that steep chase. Always very helpful in a trail race I find!

Parts of the route had 2-way runners, which only went to show how slow I was and how fast they were. Some incredible performances on a tricky course. My fear of being last wasn’t realised, I gave it my all and came home in 200 and something or other. It took me 1 hour 29 which I was pretty pleased with. I’ve lost time and confidence recently but this was such a fantastic race and place to start to get some of that back. Plus my little sister was at the finish line waiting for me. Just as she used to be right by those lamp posts.

Every finisher received a bottle of Leeds Brewery beer. I will definitely be back next year. To improve my time? Well yes of course…. but mainly for the beer!

← Race Report – Regent’s Park Summer 10k Race Report - Roseberry Topping Half Marathon – (the Hardmoors version) 9th December 2018 →
We use cookies on our website to give you the most relevant experience by remembering your preferences and repeat visits. By clicking “Accept All”, you consent to the use of ALL the cookies. However, you may visit "Cookie Settings" to provide a controlled consent.
Cookie SettingsAccept All
Manage consent