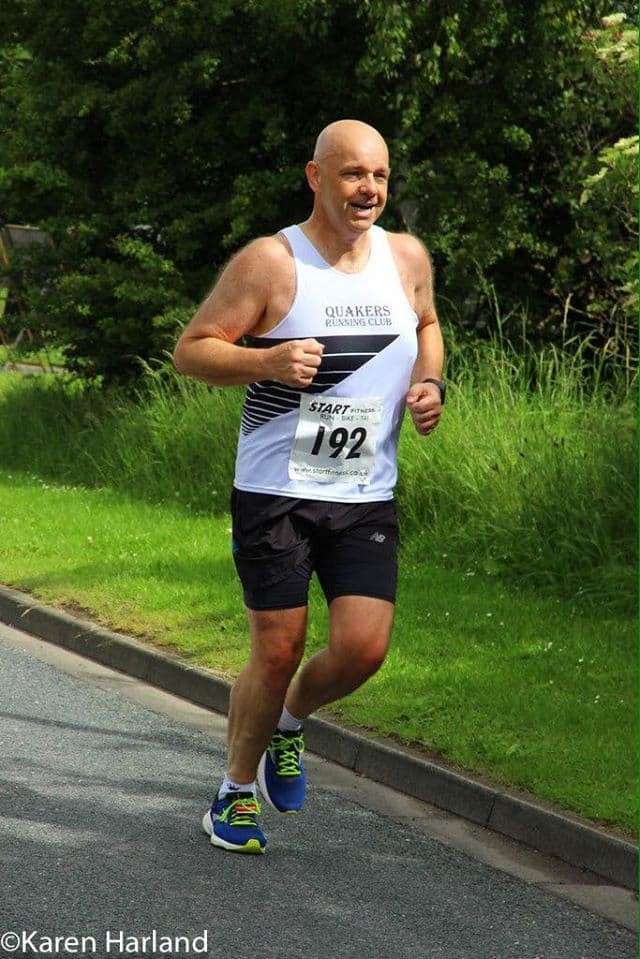 He may not have the fastest legs in the club but I’ll wager that he has the largest lungs.  If you’ve ever heard singing coming from the home straight of the parkrun, even when you were at the other end of the park, you’ll know what I mean.

When I was 29 (this is some time ago) and I hadn’t touched anything active since leaving school, I was diagnosed with Type I diabetes. I lost a great deal of weight before I found out and started with insulin injections. The advice I got was to keep fit; to do cardio-vascular exercise. I’d never run, but it seemed like the most convenient and flexible thing to do. 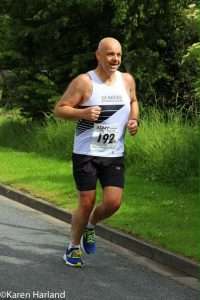 Not much! I was terribly hap-hazard and inconsistent. In 1997, I saw the 10k in Darlington and set myself the goal of taking part in it in 1998, seen as it went past the end of the road. I ‘got through’ that. In fact I got inspired enough to enter the Great North Run in 2001 – the first of 19, so far. Lots of people suggested I join a running club. When the Quakers were based at Hummersknott School I would see the steadies running past my window twice a week. Everyone looked so competent and I felt too shy to go along. So I used to shuffle solo round the streets of Darlington. In the end I was dragged along to the club about nine years ago and I’ve never looked back.

‘Typically’ Tuesday, Thursday, Saturday morning and alternate Monday nights at Up & Running’s SRG. But work and other commitments are eating into what’s typical just now.

My biggest hobby (obsession) is my band, Puce Wallpaper, in which I sing and play bass. Some members of the club have been ‘lucky’ enough to see us. We do weddings parties and pub gigs, we practice for fun and record the odd thing, which we publish on Spotify, YouTube, Amazon Music and iTunes. 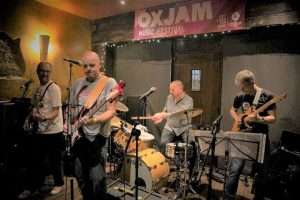 It’s 19 GNRs to date and about a dozen Darlo 10ks (because August is often holiday time). Other than that, I like to pick off the occasional 10k. I think my favourite course is the Yorkshire Coast 10k in Scarborough – when the weather is nice.

To keep putting one foot in front of the other. To finish a 10k in under 59 minutes.

Just to keep going and to keep-on enjoying the company and friendship of other runners.

I’m a bit of a parkrun obsessive, and have got up to 295 now (Eds. Note – 302 by the time I passed on Michael’s spotlight for the newsletter) . Most of those have been at South Park, but I have a soft spot for the Shildon and Tees Barrage runs which got me started before South Park launched.

It’s the consecutive run of 19 Great North Runs. It’s built up to be an annual pilgrimage. I may have to stop one day, but not yet.

Not joining the club when I was first encouraged to.

I usually have an active pair and a recently retired pair which I keep in the hall in case of bad weather. No trail shoes – absolute amateur! I’ve become fond of Brooks Launch – third pair in a row. 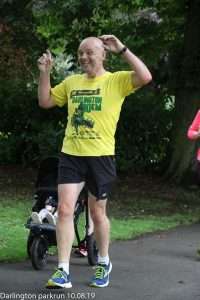 A coastal run, in the sunshine, but not too humid and probably just a bit more exotic than Scarborough, but that will do.

Stretch before and after running and be quite deliberate about targeting all the bits you’re going to put under effort. Of course, I’m very bad and tend to ignore it.

Join a club, talk to other runners, realise there’s a place for all sizes, speeds, and creeds of runner and the only achievement that really matters is taking the first step out of the door.

Just the dogged determination not to give up.

Rock and Roll and beer. Bass playing is great therapy – for me. Bass playing through headphones is better therapy for everyone else.

No particular ambitions. I love it when I am able to take my kit with me and there is an opportunity to get out. I was in San Francisco earlier this year, but the timings meant that I didn’t get an opportunity to run. If I go back there, I would like to run along the waterfront, there were plenty of people doing it and it did look like fun. 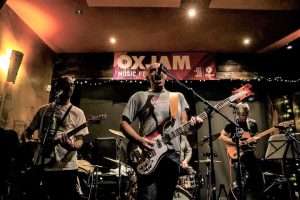 ← Member Spotlight - December 2019 - Emma Joyeux Member Spotlight February 2020 - Ian Bond →
We use cookies on our website to give you the most relevant experience by remembering your preferences and repeat visits. By clicking “Accept All”, you consent to the use of ALL the cookies. However, you may visit "Cookie Settings" to provide a controlled consent.
Cookie SettingsAccept All
Manage consent