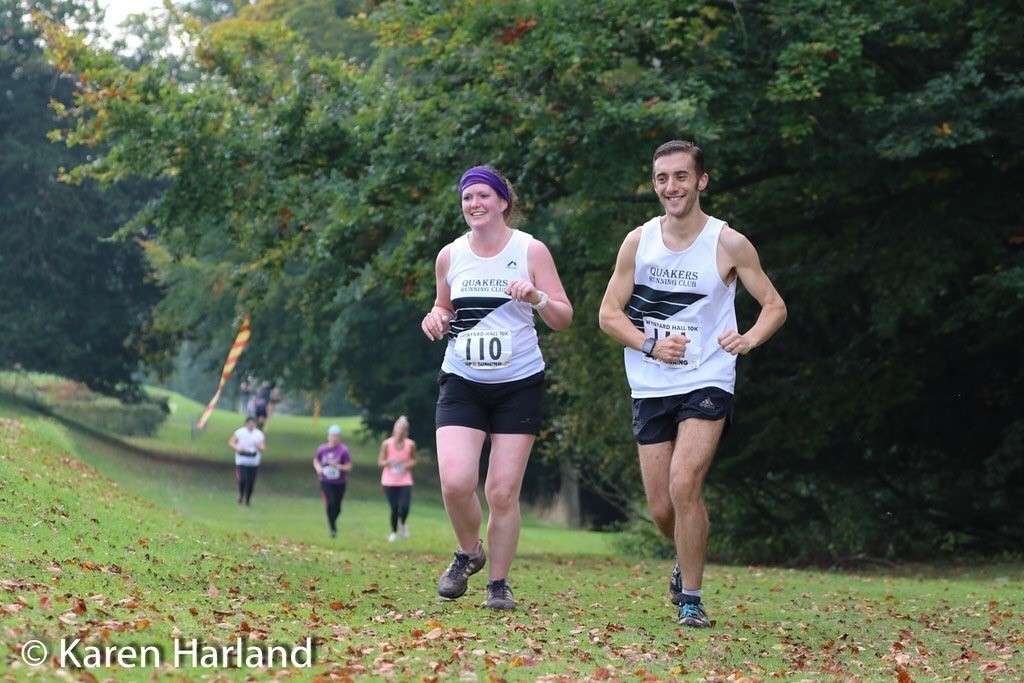 1. How did you get into running and why?
Apart from running (and I use that term very loosely) up and down a hockey pitch for over 15 years, I had never tried running, not even at school. I first attempted ‘running’ in March 2010 after entering the Reading half marathon to raise money for charity. I remember painfully training out the miles either on my Dad’s treadmill in his garage or with some of my hockey friends running around the Tees Barrage after work. After getting through the half marathon, I clearly remember saying “never again”. Twelve months later… 2. What kept you going when you first started running?
In 2011 I wanted to complete 10 events to mark the 20th anniversary of my mum’s passing and to boost the amount of money I had raised for breast cancer over those years to £10k. Seven of these events involved running, including a “never again” half marathon – the Great North Run!

Running for charity was definitely a motivating factor as I had made a commitment and in the back of my mind the reasons for my fundraising certainly kept me focused.

2011 was also the year I met Michael and the year I joined Quakers Running Club – both of which have kept me running to date. 3. Tell us about some of the races that you’ve done in the past
For someone who doesn’t really like running, I‘ve done a lot of races. The most memorable ones for me are:
2012 Edinburgh half marathon with Sandra Martin where my PB still stands – that finishing straight and that beer!
2013 London Marathon – my first marathon, my first London – very emotional, very tired…very sunburnt forehead!
2013 Thunder Run – running at midnight by head torch in thick mud and torrential rain and loving it
2013 Ropner Park 5k – I had a really bad stitch and finished that far last that they had packed up the finish area and a guy had to come running over with a watch and clipboard to write my name down – I can laugh about it now!
2015 – return to running post-pregnancy with running buddy (task master) Adrian Dent running reps up and down cemetery lane culminating in a buggy 10k at Newton Aycliffe
2018 – post-pregnancy marathon training run with the Saturday Morning Crew in -2 degrees and heavy snow at Castle Eden Walkway which involved 7x 2mile reps, each one climbing through a fallen tree that blocked the entire path. That was character building!

Finally, the Princess Challenge this year with the Musketeers; 18 miles of Cleveland Way trail…wearing a tutu and tiara! 4. How much training do you typically do each week?
Not a lot really as the “mum guilt” is taking over at the moment. I’m finding it really hard to a) get to club sessions sometimes due to work and b) when I can I usually don’t want to as it would mean only getting a few minutes with the children before bedtime. The Saturday Morning Crew has been great though as not only do we manage to get 6-10 miles in all by the time parkrun finishes, leaving the rest of the weekend for family time…but I also get to escape the Saturday morning ritual of going food shopping with the children!

5. Be honest, do you enjoy training?
No! Not that there is anything wrong with the training sessions the club offers at all – I think it’s the concept of the word training. I don’t really run for times, definitely not for places or prizes and I don’t really deliberately set out on a run to beat a PB, therefore for me, I don’t want to ‘train’. Don’t get me wrong, I love the feeling when you’ve finished a race and get a PB, but I have had too many runs being dominated by the numbers on the garmin and mentally working out pace or predicted finish time that it sometimes totally sucks any enjoyment out of the run. I’m also not really motivated by the technicalities of running e.g. to try to change technique or improve endurance or speed – I just like running to how I feel and more often than not being at a comfortable plod.

That being said, when I can get to the club, I do enjoy the sessions (main sessions and steady runs) because I much prefer running with people rather than on my own, so for me the training runs at the club or with the Saturday Morning Crew are more about the social interactions with others as supposed to the actual running. 6. Do you do any other sports or fitness activities or fit in any other hobbies?
Does running around after two toddlers count?! I think my biggest hobby must be volunteering as in my spare time I am co-Event Director at Darlington parkrun, a Leader in Running Fitness for QRC, part of the Social Committee and also one of the Club Development Officers who attends the Management Committee meetings. I have also recently been to a couple of PTA meetings at Oliver’s new school. No wonder I don’t get time to run…

7. What are your proudest running achievements?
I think I am proud every time I manage to get out the front door and complete a run! I loved getting the first ‘Volunteer of the Year’ award at Darlington parkrun and I remember being very overwhelmed to get the QRC Chairman’s Award for my charity runs in 2011. Now though my pride is taken over by Oliver who is starting to show an interest in running and even though sometimes loses his interest 5 metres into a Junior parkrun, he spontaneously came out running with me one evening a few weeks back and we did 2 miles splashing our way through all the puddles in the South Park. 8. What’s your current running goal or longer-term running plans?
At the moment my goal is to run – it’s getting out as and when I can. I have signed up to Brass Monkey in January and am part of the “Indomitable Eight” ‘Run Up To Christmas’ team. I’d like to do some longer trail runs if I can fit them in around the boys and MJ’s running. Sometimes I get carried away with ambitions of races or runs I’d like to enter, especially if I’ve come home after an enjoyable run, but then I’ll reflect and park those thoughts. Maybe one day the thoughts will become a reality.

9. Anything in your running experience you regret?
Yes – those damn 33 seconds in the Edinburgh marathon that cheated me out of my sub-5 and salsa lesson bet with MJ!

10. How many pairs of trainers/ running shoes do you have and do you have a favourite pair?
Having to compete with Michael’s 13 pairs on the shoe rack, I have 2! I am currently running in some Brooks high support shoe…not entirely sure what type (MJ will know I’m sure) as I talk about trainers like I do cars…by colour, and they are light blue and orange!

11. What is the best piece of running advice you’ve ever been given?
Graham Park once said to me that a steady run should be at conversational pace. The definition of “steady” will therefore be different to everyone i.e. some people can run steady at 9 min miles, others at 12…but if you can’t talk whilst doing it, then it’s not steady. I try to pass this advice on to others all the time.

12. What keeps you going when the going gets tough in a hard race?
I usually wear a pink wristband when running (which contains my ICE details) which MJ made me get “you can do it” inscribed on it, to remind me to believe in myself. I usually give my wedding rings a twist with my thumb as well if I feel I need an extra push to remind me of my family waiting for me at the finish.

13. How do you relax/reward yourself after a race?
Relax? With two children? Err…playdoh, lego building, painting, ‘uno momento’ restaurant role play and creating traffic jams with cars and monster trucks! If it was a tough run or a long run, I usually suggest we watch a movie!!

14. Any advice to newcomers to running?
Yes, plenty, most of which I need to say to myself in the mirror…
Running is not just about your legs. Running is heartfelt and running is mental. Running can be hard. Always remember why you choose to run. Running is so personal but it can be easy to get swept along by the momentum of running and using that adrenaline to push and push until sometimes you don’t know why you are running but because you feel you have to.
Listen to your body, listen to your heart and listen to your mind. If you don’t want to run, don’t. It’s ok! I have cried so many tears over running, trying to talk myself into going out because I felt I had to – for weight loss, for fitness, for not wanting to be that Mum that can’t chase her children round the park – then beating myself up if I didn’t go out and feeling like a failure. Being too scared to go out because I’d missed a week, two weeks, three weeks – forgetting of course that I have come back from two pregnancies where I didn’t run for 9 months.
Running for me will always be a battle in my heart and mind. I will have to tell myself this advice many times in the future I’m sure, but I know that each time when I am ready to run again, I know that QRC will be there with friendly people to run with and for that I will always be grateful. ← Member Spotlight November 2019 - Nicola Wells Quakers Member Spotlight, January 2020 – Michael King →
We use cookies on our website to give you the most relevant experience by remembering your preferences and repeat visits. By clicking “Accept All”, you consent to the use of ALL the cookies. However, you may visit "Cookie Settings" to provide a controlled consent.
Cookie SettingsAccept All
Manage consent