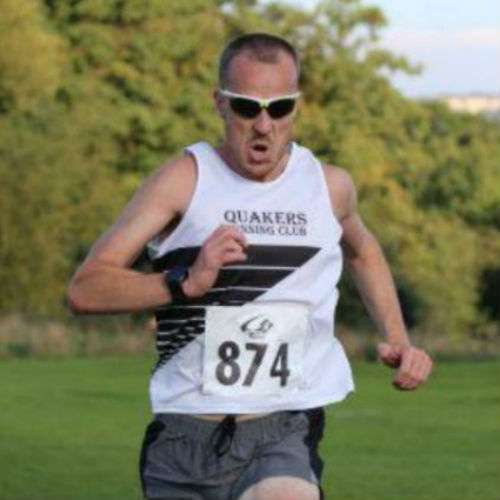 Marc Ellis, in his trademark shades and Quakers vest

I started running at school and ran for the “Darlington Harriers” (I hope this does not affect my relationship with the club!) in the late 80s / early 90s and did the 1986 Great North Run. This did not last long, and after several years of, let’s say, “over-indulging” on drinking and smoking, I wanted to change my life again and get something positive back in my life.

In 2011 I met an old school friend and in conversation she told me that she had three girls who all had kidney disease. At this point I decided that I would try to help and I ended up running the 2012 London marathon to raise funds for some much needed treatment. I immediately got the running bug back after this experience.

I think in my second spell of running I was blessed with my first race being the London marathon, so it was easy to find the inspiration for training, knowing the goal I had ahead of me, and also the people that would benefit as a result of this. I ran that first London marathon in a time of 4:02:00 – I was a little disappointed that I had not broken the 4 hour barrier, so I immediately entered another marathon with the aim of achieving this.

But all in all I have never found it an issue to motivate myself, as I love the feel good factor each run seems to give me once done, and all the positive stories that are associated with running. I think it also helps to give yourself goals and you should never lose sight of these.

In 2013 I ran both Windermere & Kielder marathons and these two races both taught me so much, especially Kielder where I had my first experience of “hitting the wall”. I had a horrid time at one point, when my legs were like jelly and I ended up on the floor at least half a dozen times. The big lesson I learned was that you should never under-estimate races of this nature: you have to train seriously and not think that you can simply turn up on the day.

One of my favourite races was this year going on the “Dutch Dash” with the Quakers where I ran a new half marathon PB. And I have to say I also enjoy our hometown 10k.

Since April this year I have stepped my training up a gear and probably average 40 miles a week. Within that I try to have two intense sessions – which could also be a race itself. I tend to never run a day before a race and also try to get a full week of rest every three months. I strongly believe that your steady and slow runs are as important as the intense sessions and that rest does actually improve your performance, instead of causing you to “fall behind” which is what I once thought.

Since joining the club in 2014 and participating in the various main sessions, I think I now have some sort of structure to my training. I would encourage new members and those who normally do just  the “steadies” to not be intimidated by the main session: no matter what ability the individual has, they can really improve their performance with these sessions. I really do like training and love the feel good factor it gives you, especially after a hard session. Sometimes the weather can be harsh but if it is due to be a training day I would still go out regardless – it’s days like that which you get so much from, and they really do toughen you up. Again, as mentioned, I think having a goal really helps with training and trying to envisage the completion of a goal helps on those days when sometimes you just can’t be bothered. Most important is to always try to have a positive frame of mind: you can’t under-estimate how powerful the mind is and how hard training can be with a negative mindset.

My current goal is to run a sub-three-hour marathon in 2017 – hopefully I will achieve this in April around the streets of the capital. After this I am hoping to follow in the footsteps of my Quaker hero Brian Martin: he has had such an influence in my successes this year, and like Brian himself I want to qualify in another race at the marathon distance to represent the country! Nothing like setting your goals high! But that remarkable man has really made me believe in myself.

I definitely prefer road racing, although I have to admit I am enjoying my first x-country season – something which I have in the past wimped away from, and made excuses about! Hopefully it is something which I will gain some benefit from in 2017.

My favourite race without having to think for a moment is definitely the London marathon: the support and atmosphere is second to none and is a ideal way to finish months of hard training. I have to say the marathon is my favourite distance.

This is a hard one… I think I will have to name two from this year: firstly running 3:13 at London marathon and also finishing Eindhoven half-marathon in 1:20.

Either of the two Roseberry topping races I did in this year’s championship. The second was a funny night – not a single Quaker mentioned they were going, as we all had the same idea: of turning up and gaining a easy 50 points! The looks on everyone’s faces when around 10 of us all gathered in the car park! Remember this Mr. Dalton?!

This is an easy one… last year, when I ran 505 miles from Land’s End back to Darlington to raise money for St. Teresa’s hospice. This is something which I could talk about forever, but the main thing I took from this was how powerful and important the mind is in running.

During that journey back when my mind was in a negative place (especially in the pouring rain on Dartmoor) I had pains in my legs which were without a doubt some form of injury – I hobbled 9 miles on one day, and we even spoke on two occasions about how we were going to end it and let everyone know. The following day was a much nicer day and after speaking on the radio, I got myself focussed again – and there was not even one little ache…! How the mind sent these signals to me, on occasions, was astonishing.

A bus trip with the Quakers to a running event – after supporting each and everyone until all are back safely, we have a few hours in the town we’re visiting, to enjoy a few social drinks.

One of two things: Either “hitting the wall” again as I mentioned earlier – hopefully the chances of this happening again are a lot less, as experience is a big thing and I think I now train in the correct way before tackling the 26.2 mile distance. Secondly, getting caught short half way around a marathon with a bad case of the runs: something which I have seen happen to someone recently.

As I already mentioned earlier – set yourself goals. This helps to keep you motivated and encourages you to get out, even when sometimes the weather may not be the greatest or at times you may be feeling a little lethargic. Also, try to keep in a positive frame of mind as we can all achieve great things by knuckling down. My partner is probably sick to death of hearing this, but there is nothing as true as the old saying “you get out what you put in”.

Everyone who is reading this has already made the first step (and one of the most important ones) by joining a club: but do not be frightened of stepping up into a faster “steady group” or into the main session, because ‘this is where all the fast guys / girls are’. They are no better than yourself! Yes, maybe faster, but definitely not people to be intimidated by: this will push you that little bit more which results in tough workouts, but positive results along the way. These people can offer so much encouragement and good advice.

Either imagining the elation and feeling you have experienced before when crossing that finishing line. Or maybe reliving one of the best days you have had in your life, whether its running related or not. I think doing the local parkrun is a good way to ease yourself in, as you start competing against personal best times & finishing positions. After this, competing in the club championship or 10k leagues is a great experience.

I believe there is no better form of training than racing regularly.

A nice hot bath and some good food – maybe with a pint of Guinness.

Tricky… well after running probably the best 10k of my life three days before writing this, I believe breaking the 36 minute barrier is just around the corner. Given the support mentioned above, maybe 35 minutes could be achievable.

Mars Bar – I expect water to be provided on finishing!

← Member Spotlight, Nov 2016 - Michael Joyeux Member Spotlight, Feb 2017 - Barbra Barker →
We use cookies on our website to give you the most relevant experience by remembering your preferences and repeat visits. By clicking “Accept All”, you consent to the use of ALL the cookies. However, you may visit "Cookie Settings" to provide a controlled consent.
Cookie SettingsAccept All
Manage consent