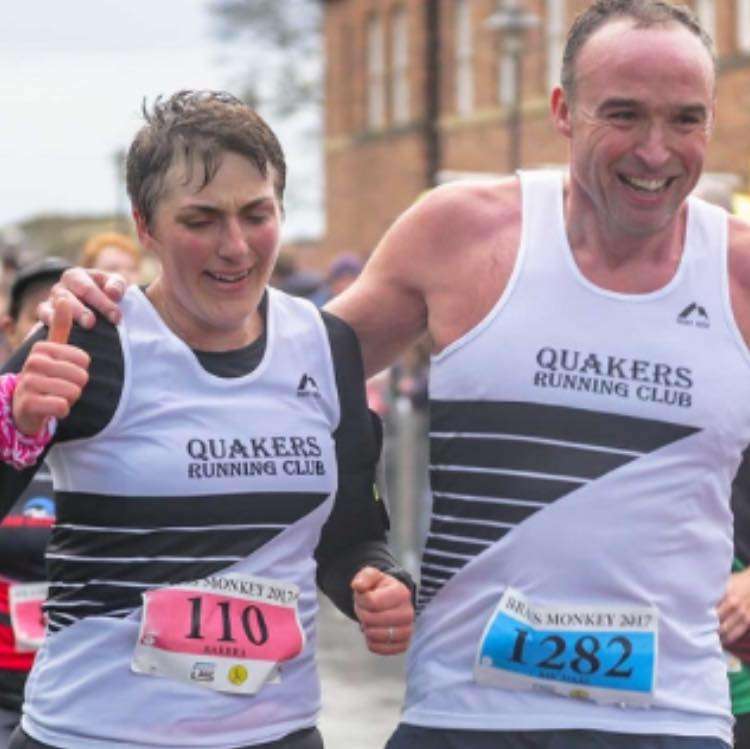 A year ago, I’d never worn trainers and I was six stone heavier than I am now! I began with the first session of “These Girls Can Run” on 4th February. We did a loop around town which was 2 miles, and it took 45 mins! I felt embarrassed as we were setting off, and I didn’t think I could do it. But I did it! I remember running along Borough Road, saying to the run leader “I’m running!! I’m running!” Afterwards I was exhausted, but I couldn’t wait for the next run.

Three weeks later, I did my first parkrun – I was a little nervous among so many other “real runners”, but soon realised “I’m wearing trainers, I am a runner”. As all the faster runners went past, not one of them said “Oy fatty, what are you doing here?!” – there was only good support. The amount of people who gave encouragement, saying “well done, keep going, you’re doing great, don’t stop” was amazing. I absolutely love parkrun – my first took over 40 mins, and now my PB is down to 26:38.

I needed to get the weight off. I have a three year old daughter, and I couldn’t run around after her. I have lost both my parents, so I really want to be fit and healthy for my wee girl. She’s the motivation to carry on – her cheering me on is what really got me through some of the tough times, when training felt too hard. Now she thinks running four times a week is perfectly normal, and she can’t wait to be a big girl so that she can come running with Mummy too. She cheers on all the runners in the park!

Although I’ve only been running for a year, I’ve already done quite a few races. My first proper race was Croft Pit Stop, which was amazing, and quite emotional. It was the fastest I had ever run, and it taught me a lot about managing my pace, and managing my nerves. The experience of finishing was incredible – people at the finish line cheering me on, getting my photo taken, receiving my first medal – it was great.

I did Darlington 10k, then the big one – the Great North Run! In a moment of madness (I hadn’t even run a 10k) I signed up for GNR. I got a charity place, then realised I had 3 months to go from running almost 5 miles to completing 13.1 miles. I was determined to run every single step, no walking – and I did it! I cried! I loved it, every single step.

Two weeks after GNR I did Redcar 10k, which was a very different, much tougher experience. At GNR there was lots of support, crowds of people encouraging and pulling me around – I knew Redcar was much more about me, and keeping myself going. I didn’t know if I was capable and it became a real mental battle. I finished, hated it, and swore never again – until 10 minutes later: “Of course I’m going to do it again, and I’m going to do really well next time!”

I’ve learned a lot about myself since I started running. I’ve found self-motivation I didn’t know I had. I’m not competitive at all, against other people, but I am super-competitive with myself. I didn’t realise how determined and strong I can be: “I’m going to do that, and I’m going to do it well.”

As much as I possibly can! I hate rest days – but I am taking them now. I try to run four times a week, plus a couple of gym sessions. Whenever I have a bit of spare time, I know routes to fill that time – my 2 mile route, my 5k route, depending on how much time I can grab. My work colleagues laugh at me grabbing the chance for a run straight after work, making the most of the childcare time.

YES! I love the sessions we’re doing at Club, as they’re new to me, and very different to what I’ve done before. I’ve not been a member for very long, but already I’ve seen a massive improvement in my fitness.

I have a few – I want a sub 25 minute parkrun, and a sub 2 hours half-marathon (18 seconds to find!) I am very target focussed, and want to reach 1h45 half-marathon, eventually. I don’t want to run a marathon! If I was to do one, I’d want to do it well, so I’ve decided no – with my little girl, I can’t commit enough time to training.

Up till now, I’ve been constantly improving, and that’s how I judge how well I am doing. But I know that I’m going to have my first race where I go slower than the previous one, and I think I am going to struggle to deal with that, as it hasn’t happened yet. I need to relax and not be so tough on myself sometimes! After losing both parents to cancer, Race For Life was an emotional day. “Good running Mummy, you can do it!”

I like half-marathon distance, but I don’t know why, as it’s hell! Because it’s all so new to me, and it pushes me to my absolute limit, which I like. I thought I’d like the short 5k runs, but I can’t quite get into it, find my pace. I’ve never done a 10 mile run before – maybe that’s my ideal distance?

I do prefer road running. I’ve tried a couple of fell runs, which I really enjoyed, and I definitely want to do more. I found it more relaxing, and maybe that’s my recreational running. But I’m very focussed on times on the road race distances, and it’s how I judge how well I am doing.

My last one! Brass Monkey half-marathon, in 2:00:18. I can’t really be disappointed with being 18 seconds away from that magic 2 hour time, because I knocked a huge 22 minutes off my half-marathon PB! I had been aiming for 2:10, so I smashed that.

I was also very proud of doing the distance at the Great North Run. I left my big old jacket behind, at the start line – it was quite symbolic, like leaving the old me behind, and I was quite emotional.

I hated Redcar – but I am going to go back and do it again, to prove to myself I can. I’m still learning from them all. I’m not sure if I’ll enjoy track running, as I get bored doing laps of parkrun – but I’ll give it a go.

The first run! It was so tough to actually get out there and do it, and if I hadn’t taken that first step, I would never have achieved all I have.

I was also really proud to get my first sub 30 minute parkrun – I saw people running under 30 minutes, and thought – yeah, they can run, I want to do that. Now I’ve had friends ask me to help pace them to sub 30 minutes, which still seems like a novelty.

Nice early start, cool weather, a race, and a nice big cup of tea at the finish!

What’s your idea of running hell?
Nasty weather – rain, wind, cold… and uphill! I don’t like laps, or repeating the same things over and over. I get bored!

Do it! Make a start. The hardest part is putting your trainers on for first time, and going out. Don’t try and run fast – just run, and enjoy it. I used to think you always have to run as fast as you can – but you don’t. You’re a runner whether you do a 14 minute mile, or a 6 minute mile. I started with a beginners running group, which really helped me get started, because I was amongst other people who were starting out. I’d definitely recommend joining a club. I didn’t join the Quakers to start off with, as I worried it was a club “for proper runners”, and I worried I would be holding people back, or wouldn’t be good enough.

Little did I know it’s not like that at all – far from it. The support I’ve received is just amazing, from everyone at the club, even people I’ve only just met, have been so kind and supportive and encouraging. They are genuinely interested in me, and pleased for me when I run, and genuinely want to help me improve. I wish I’d joined months ago!

That big cup of tea, a red hot shower, then get my onesie on!

Apple – that’s what pulled me round after Redcar. There was a Mars bar in the bag, but I couldn’t eat it. Always an apple!

I’d just like to say a big thank you to the Club for the support that I have received so far, and for the belief in me. It was nice after the Brass Monkey, a few Quakers said to me – “Just think of what you are capable of now – you have great things to come.” I could barely walk back to the car, but it was nice to have people look ahead for me, and I’m excited about what comes next this year.

← Member Spotlight, Dec 2016 - Marc Ellis Member Spotlight, Mar 2017 - Brian Martin →
We use cookies on our website to give you the most relevant experience by remembering your preferences and repeat visits. By clicking “Accept All”, you consent to the use of ALL the cookies. However, you may visit "Cookie Settings" to provide a controlled consent.
Cookie SettingsAccept All
Manage consent