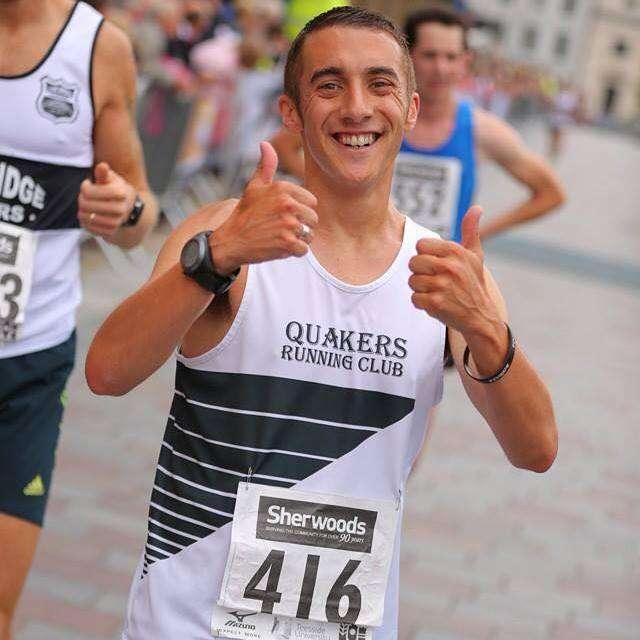 I first got into running in 2004, aged 21, when I started a bit of a weight loss kick. I was having a “year out” from university and I was quite hefty at the time and wanted to try and slim down and lose some weight before going back. I was going to the gym regularly and doing 20 minutes on each of the cardio machines: treadmill, rowing, cycling and the cross trainer. I lost a good amount of weight and a friend suggested that I sign up for the Darlington 10k; I did and ran round in just over 45 minutes. Then, after my Grandfather passed away, I was goaded into entering the Great North Run to raise some money for St. Teresa’s Hospice. I jogged and spluttered my way through training and finished my first Great North Run in 2005 in 2:10.

I kept jogging away and resolved to join a running club when I finished University. I worked with the daughter of one of the infamous Shevals and she recommended the Quakers so one night in October 2006, I decided to go Hummersknott and see what was happening…

When I first started running, it was the range of different new and exciting things which I was suddenly doing. Rather than spending my evenings and weekends attached to my Xbox, I was now in a forest in Guisbrough, running around Redcar or going along random B roads in the middle of nowhere. The main thing though was the competition that the club championship provided: getting age graded points became the goal. I became absolutely obsessed with racing against Ian Hammond and it culminated in us finishing the Edinburgh Marathon together. The constant PB chasing and wanting to improve was a great driver!

I don’t think there isn’t a race distance or terrain which I haven’t ran on. I’m up for trying anything out. At last count, I must have done well over 400 races now and I still have every race number I’ve ever worn!

Some of my favourite events have been the off-road comedy events which Anthony Corbett is normally responsible for getting me into:

But as much fun as getting off road, I do love road running and doing races like the Mermaid 10k are where I feel happiest: pushing for PBs and racing!

Another infamous race I did was the Three Shires fell race which took me almost four hours to run… the race is only 12 miles long!

I normally run around 50 miles on an average week, depending on races. I try to get to the club or do some structured training on a Tuesday, Wednesday night is speedwork and all other runs are usually pretty steady or match whatever I’m training for at the time. I also try and do three sessions of DDP Yoga a week to keep everything moving smoothly!

I think the enjoyment of training can be best when it’s the smug afterglow of a hard session. I usually do enjoy it but I do think that getting a run in when you don’t want to, helps build mental resilience. I do love running and training most of the time so that does make it easier!

At the moment, I’m thinking about 10km on the track and on the road. I’d love to be thinking about a marathon but don’t have the time to train properly so it’s all about the short distances for the moment. I’m aiming to run under 32:30 for 10km and 1:13 for the half marathon in 2017. I’d then like a decent crack at another marathon in 2018 maybe? One illustrious day, I’d even like to take 50 points off Brian in a Club Championship race!

The 10k is the most popular distance for a reason! I love the Mermaid 10k simply because it’s always a feel good race. I’ve managed to year on year, get a PB in most runnings of the race. Then, it’s off for fish and chips, followed by a day in the pub drinking beer and talking about running. Oh what a perfect day! Michael Joyeux – “…where I feel happiest: pushing for PBs and racing”

Probably my 2:38:55 at the London Marathon in 2015. I had trained to get the Championship time of 1:14 for a half marathon and then trained for six months to do London. The race went pretty much perfectly and although I didn’t get the 2:36 I was aiming for, I feel proud that I managed to get through the training and execute the race plan. Although, winning the Mermaid 10k in a PB time of 32:47 is a very close second! Don’t know where my legs came from that day!

Another lap of the Thunder Run at 7am. Those who’ve been there know exactly what I’m talking about!

After spending years trying to do it, winning the Quakers RC Club Championship in 2014. It’s an age graded competition so running with a handicap against some quality masters athletes made it a big focus! I do appreciate that Brian Martin didn’t give it a crack that year… but one day…

To me, running heaven would be running on a winter afternoon with some of my friends on a trail somewhere with a beer and a meal at the end of the run.

I experienced running hell on a Wednesday night in March 2015. Halfway through Marathon training, I was doing a ten miler on the tour of the town route: I was meant to be running at 7:11 min/miles pace but I just couldn’t get below 8:30. I was tired, bored of running, sore and angry. I was close to Mark Robinson’s house and I almost knocked on his door and asked him to take me home. I’ve never hated running as much as I did that night.

In terms of training: consistency. Regularly running a few times a week will build you up into a pretty strong runner very quickly. A couple of club training nights, a parkrun and a long run and you’ll do okay! Also, find a running partner! I do a lot of runs with Paul Dalton at 6am and that keeps me training when I sometimes might stay in bed. I’ve tagged along with so many people for runs and that always keeps me coming back! For more experience runners, I do believe that you need to be doing at least 40 miles a week to start making rapid progress – with a focus on quality structured training.

Also, join the club and get to know the runners who make our club so fantastic. There’s so many great people who I’ve met through the club who’ve inspired me to do new things, challenged me to push myself or encouraged me when times have been hard. The members, coaches and officers can offer so much – take advantage of the combined wisdom!

I think about being told that I can’t do it; I think about the first mile I ever ran; I think about the satisfaction of giving it your all and not offering an excuse: then, it’s time to zip up the man suit and get wig splitting! I really hate having a reason or an injury to excuse a poor performance; if you’re not good enough to do it on the day, own it and learn from it.

I think the variety and competition of the club championships and 10k leagues are the best way to discover new races. Both offer a level playing field with everyone else in the club. Not everyone can win it but it’s the personal challenge of trying to do different races and setting yourself a target: get into the top ten, beat a training partner or just complete a whole set of races.

Best way to relax / reward yourself after a race?

If everything was perfect, I reckon maybe 31:30.

Banana definitely, will save the chocolate for when I’m not training.

← March 2016: Stephen Moore Member Spotlight, Dec 2016 - Marc Ellis →
We use cookies on our website to give you the most relevant experience by remembering your preferences and repeat visits. By clicking “Accept All”, you consent to the use of ALL the cookies. However, you may visit "Cookie Settings" to provide a controlled consent.
Cookie SettingsAccept All
Manage consent