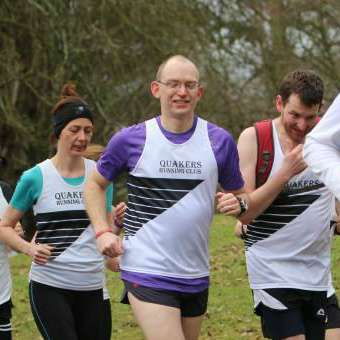 I remember where it all began… Looking at New Marske Harriers website for the final date in the 5k Coast Road series and there was a news article about a free 5k run on a Saturday morning in Albert Park in Middlesbrough. And so the following Saturday, 05/07/2008, having looked up where Albert Park actually was, I found myself on the start line of their event 6 with Andy Fisher giving the run brief.

These became a semi-regular occurrence, until the second North-East parkrun appeared at Sunderland.  My first visit there, for their 12th event on 30/01/2010 provided me with my best ever finish position, 4th place – out of 6 runners ! The snow, which hadn’t started to appear until about 5 miles before Sunderland, was very deep on the course and Event Director Sam Brown decided seeing as I’d come all that way she’d let the event go ahead. (The results were subsequently taken down by parkrun HQ as they thought they were corrupt, showing only 6 runners!)

My first inaugural parkrun was Durham, 13/08/2011. It’s always great going to an inaugural as there’s extra excitement – and slight fear from the core team. This was Durham’s original course before the riverside started to collapse and the path was closed. I now had 3 events to chose from.

Move on to January 2012 and I received an e-mail from Jane Spink of Sedgefield Harriers, asking if I’d be interested in drumming up support for a new event at Hardwick Park. Myself, and Michael Joyeux, went to the initial meeting in Sedgefield and the funding was sourced to set it up. 17th March 2013 was Hardwick’s first – and I missed it as I was already committed to a charity race for Mountain Rescue in Ravenscar. But the following week I was there for my first of the 61 runs I’ve done there to date. (At this point my ‘home parkrun’ changed from Albert Park to Hardwick Park and will always remain so).

As time went on, more courses appeared in the North East, so I decided to visit them all – then I moved further afield and travelled to several of the Yorkshire events.

Furthest journey?
Well, I had to be in London late Saturday morning, so with military planning, April dropped me off at the railway station at 5.30am for a train to Kings Cross, a quick change of train and I was on the start line at Ally Pally in plenty of time !

Most annoying?
Driving to the National Trust estate at Nostell Priory for what I perceived would be a fabulous run with beautiful views. There was so much fog I saw nothing except 10 feet in front of me all the way !!

Prettiest?
Difficult, but I think I’d go with Fountains Abbey. The abbey, the lake, the woodland. There are many very very nice ones, including Hardwick.

Ugliest?
Less difficult, must be Hartlepool. Can’t recall a lot of park – just concrete sea wall and an out and back course. Nothing wrong with the event itself – just not pretty.

Most enjoyable?
Tough call, but for my 100th a number of Quakers came to Hardwick and were presented with race numbers to use during the run proclaiming Anthony’s 100th – I got number 100 obviously. (Thanks April). And a truly amazing parkrun cake Diane had organised for me. Most poignant?
Must be Darlington the Saturday after we lost Quaker clubmate Neil. The sea of black and white shirts, not competing, just ‘being there’ was amazing.

Fastest?
The stats will show Albert Park exactly 6 years after my first run there. However, in reality my mind says Hackworth two weeks before – although 28 seconds longer, the course itself is so much harder and slower.

The future?
Well, love the tourism, so as more appear I will try to find ways to get to them ! And long term, the coveted 250 shirt hopefully!

In amongst this I make sure I do at least the minimum 3 volunteers stints a year and proudly wear my 25 volunteer shirt regularly. The ethos is the same everywhere, friendly, fun and amazing people. It’s brilliant running new courses – I personally struggle to understand why people who could try a different event, don’t. Not once have I felt like an intruder at another event. Just remember though, almost all do, but not every course has toilets available pre-start !! (And scones everywhere do not match up to Hardwick standards !)

200 runs at 39 different courses with 12 inaugurals

← Race Report - Staveley Lakeland Trail - Sat 6 May 2017 Race Report - Edinburgh Marathon - Sun 28 May 2017 →
We use cookies on our website to give you the most relevant experience by remembering your preferences and repeat visits. By clicking “Accept All”, you consent to the use of ALL the cookies. However, you may visit "Cookie Settings" to provide a controlled consent.
Cookie SettingsAccept All
Manage consent