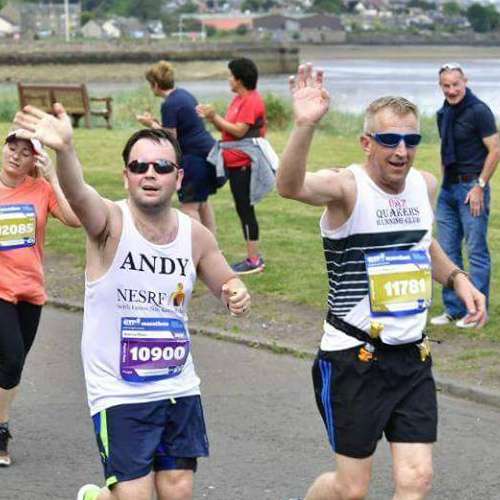 My first, my last (probably not!), my everything… On a lovely warm Scottish Sunday morning in May, I made my way to Regents Road, Edinburgh, to start my first and potentially last marathon. Accompanied by my loyal better half, who had spent the whole weekend so far trying her best to keep my nerves in check, and telling me over and over that I wasn’t stupid and I could do it!

We wandered down to the start line to take some photos before the crowds gathered, then headed towards a refreshing sight, a gaggle of runners wearing the Quakers black and white. Pre-race stories were told, and nerves settled. One emergency toilet trip later and it was time to kiss the wife goodbye. Myself, Darren Alderson and Lynn hatch headed to our pen, wishing Jamie Pratt and their friend Dennis good luck as they headed to their pens. One final look of support from the wife and I was off, this is it – Marathon time!

Myself, Lynn and Darren set off at a brisk pace, and the early miles were enjoyable. Then, approaching mile 4, my pre-race nerves caught up with me, and I had to make another emergency toilet dash. I bid my teammates a fond farewell and joined the back of a nervy queue. 2 minutes later I was good to go, and made my solo way along the next few miles. My custom made vest (courtesy of my better half) was attracting some attention and there is nothing like strangers shouting your name in encouragement to make you feel proud and keep going.

Mile 6 was delightful, as I hit Portobello and the crowds were out in force. This positivity carried on as I approached Musselburgh for the first time; I absolutely felt on top of the world, and then like a mirage I saw Darren. I took catching Darren as a signal that I might have pushed it a bit too much over the last few miles, and I gladly joined Darren at his pace, and settled in for a few enjoyable miles.

One of the cruel things about Edinburgh is running past the finish at 10 miles, knowing you have a never-ending 8 mile road to run up and back down ahead of you. However this blow was softened by hearing a surprisingly familiar voice bellowing words of encouragement at us; Darren and I both looked right to see an exuberant Olly Moore in full-on supporter mode, just the boost we needed as we approached half way…

Darren left me at mile 14 for his own toilet trip, and I made my solo way up the never-ending road. Injuries had stopped my training in its tracks about a month previously, and this began to tell at mile 16. The heat, and the sight of people running back the other way began to take its mental and physical toll, and basically my legs felt knackered. Miles 16 to 20 can only be described as a personal fight with myself. I was not in a good place.

At roughly mile 18 we all rounded into a country estate, I saw a first aid tent, and took this opportunity to take extra water on board. I’m not fully sure what happened next, but my my memory tells me I ran into a field, and there was a band playing tequila, offering free bananas. Feeling weak, I gladly took them up on this offer. Mile 20, serious words with oneself were had! The last 4 miles had been torturous, and my place was slowing. I made an agreement with myself, to run half a mile, walk for 2 mins and then run another half mile. Right, I can do this! Suddenly the miles began to disappear, and before I knew it a fellow runner bellowed at his friend, only a parkrun to go! This was the last push I needed – I’ve done plenty of parkruns, I can do one more!

The final mile and a half was joyous, and rather emotional, the crowds thickening and support increasing. Turn left, and the majestic sight of an inflatable finish line is in sight! I’m not afraid to say my eyes were slightly damp with emotion as strangers shouted me home in encouragement. I made for the line!!! Yes! I’ve bloody done it! Never doing this again!!!

I staggered through the finisher’s enclosure, collecting my well earned medal and goody bag, then made my way to the meeting point – the beer tent, where I was met by a slightly frustrated Jamie Pratt – ” they don’t take card, I can’t get a pint!” My wife joined us and gave me a proud celebratory embrace and kiss, and got the round in! Darren and Dennis soon joined us and the next couple of hours was spent drinking in the sun, exchanging war stories, and toasting our achievement! Time for a shuttle bus home, and my mind had already gone from never again, to how I could feasibly knock ten mins off my time……. Edinburgh, you were awesome.

← Member Report - My parkrun Journey Race Report - Bramham Park 24hr Event →
We use cookies on our website to give you the most relevant experience by remembering your preferences and repeat visits. By clicking “Accept All”, you consent to the use of ALL the cookies. However, you may visit "Cookie Settings" to provide a controlled consent.
Cookie SettingsAccept All
Manage consent