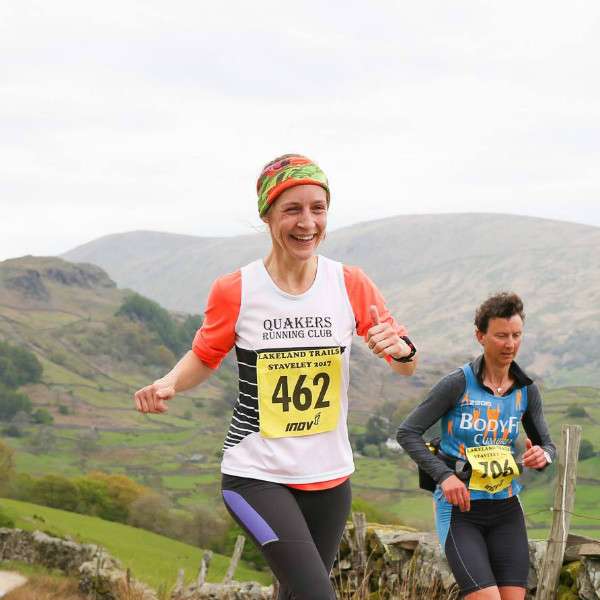 There’s a sting in the tail…. On the Kentmere trail! Shades out; vest on; music streaming out of the speakers; We were on our way to the next Lakeland trail event, this time heading into the secluded valley of Kentmere.  The previous event at Cartmel in March had been a glorious mud bath.  Heavy rain and battering winds meant that it was an achievement to park the car on the field let alone complete the race! This Saturday, however, the weather was perfect- not too sunny but relatively warm and not a rain cloud in sight- excellent! There is always a carnival atmosphere at the start of Lakeland trail events with stalls selling coffees and ice creams (luckily they’re still there at the end too!) as well as pop-up inov-8 and Pete Bland shops for that last minute sock buying extravagance.  A battle call from a local Samba band, followed by a bass drum beating out the starting gun and we’re off out of the field and onto the quiet streets of Staveley.

Worrying about going off to fast? Fear not, Staveley is the race for you! After running for a few minutes I look up and see a trail of runners snaking off up a steep track to the hills.  It is impossible to start too fast, the gradient sorts that out.  It was about half way up this track that it dawned upon me that the views were beginning to open out.  The beauty of climbing steeply is that there is time to look around at a panorama that is becoming increasingly awe-inspiring.  Kentmere is a hidden gem for me.  It is no secret that I love the Lakes; but this south eastern corner is less familiar and I remember thinking that I must look up which mountains are keeping us company today.  These views become all-consuming and before I know it we’re at the top of the hill and gliding over grassy uplands.  The bracken is only just growing up and is a wonderful fluorescent green, often still curled up, on the edge of springing open.  A sharp and rocky descent and we’re back at the valley bottom, 5K already gone and winding now through bluebell carpeted woodland.  After following the meanders of the river Kent we begin to climb back onto the fellside, this time on rocky trails lined with the characteristic Lakeland dry stone walls and over lush meadows and bubbling streams. Nicknamed the “Sting in the tail” the Staveley trail run is famed for a steep climb to the top of Reston Scar at around 17K before a mad rollercoaster kilometre descent back to Staveley.  The top can be seen from a distance but nothing quite prepares you for the views up there.  Yes, the climb up was tough, it is steep but grassy and the excitement of almost reaching the top is enough to keep you going! Over my shoulder the higher rugged peaks of the Lake District were breath-taking; a quick glance and the only mountains I could vaguely identify (and probably incorrectly, although it made me smile at the time) were the Langdale pikes (another mental note to buy an OS map).  Below me were the rooftops of Staveley, I could throw a pebble down the chimneys; it was time to let the brakes off and finish the race. This downhill sprint had been the part I had worried about. Uphills are a case of mind over matter, you can cajole yourself into a lot of muscle burn when there’s a reward at the top. Downhills on the other hand… I mean, let’s be brutally honest, I have successfully managed to fly head over heels going downhill on Abbey road.  However, the actual descent was exhilarating! What a finish! Hairpin bends in the path down the slope of the Sting, the wind so strong I could lean into it and stay on my feet, arms splayed out for balance, quickly followed by a short dash along the lane back to the field, into the finishing straight.  T-shirt, water, and time for a cuppa while I watched the other runners coming in.  Unique to the Lakeland trails, “Apres trail” includes live music, prizes, more cake, more tea; it is definitely more a day out than a race.

These races are ideal for anyone wanting to dip their toe into Lake District running without the worrying that you might have to hurtle down scree or accidentally follow a smudge of marmalade rather than footpath while reading a map.  There are 3 different distances; 5k, 10K and 17K and even two children’s races (involving chasing a man dressed as “Gerry Giraffe” around the starting field…) so there really is something for everyone.  Moreover, the 17K has the option of two different start times.  “The challenge” gives runners more time to complete the course than “The race”. I’d chosen the challenge event which meant I had 3 ½ hours to complete 17K (which in true trails style was 18K. Bargain!).  This race has to be one of my favourite races, a “living the dream moment”.  A day out in the Lakes… running… live music… post run food… what more could you want? I can’t think of a better way to spend a sunny May Saturday.

← Race Report - Reeth Trail 20k - Sunday, 30th April 2017 Member Report - My parkrun Journey →
We use cookies on our website to give you the most relevant experience by remembering your preferences and repeat visits. By clicking “Accept All”, you consent to the use of ALL the cookies. However, you may visit "Cookie Settings" to provide a controlled consent.
Cookie SettingsAccept All
Manage consent