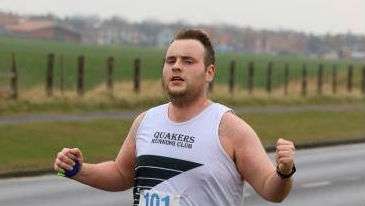 Phill on route to a new 10k PB at the Mermaid 10k! Good on grass; great on tarmac!

I’ve never told anyone this (not even my wife) so maybe this is a little more deep than what I’m known to be, but I got into running because I was having some chest pains (I’ve never told anyone about these either) and I read an article about a bloke in his late twenties who was clinically obese who had a massive heart attack and died, he’d left his wife and daughter without a husband or a father. I was turning 23 in a couple of weeks newly married with a young daughter so this really hit home so I went to boots and got on the scales which revealed my B.M.I was 39.9 just 0.1 off being clinically obese. I knew at this point I needed to make a change for my family as well as myself if I wanted to be around to watch my daughter grow up. I’d heard about Parkrun so off I went!

I always said I’d join the Quakers once I could run under 25 minutes, I’d ran Parkrun a few times then in a moment of madness I signed up for the Redcar 5k. My pb was 26:47 at the time, but just after the half way point this lad with not an ounce of fat on him came past me and something in that moment told me I needed to beat him for all the fatties out there, but that only happens in films and he beat me on the sprint finish haha, but having stuck to him like glue for the second half of the race my time was 24:50, so that meant it was time to join the Quakers and how can you quit running when your running with a club full of people willing each other on every sweaty step of the way.

As a newbie I’ve tried to vary the races I entered best I could from distance to terrain, which has led me to running a few of the Stockton winter 5k trail series races to 14.2 miles of tarmacked hills at Dentdale.

I run four times a week and increase or decrease my mileage and pace depending on the race I have planned to focus on, my weekly average tends to be around the 30 mile mark.

Yes I really do, but I think that has something to do with the company. I believe training is all about enjoying yourself and having fun with your friends. If I ran on my own every single time I’m pretty sure the answer to this question would be very different, I mean there is only so many times a man can listen to eye of the tiger on his iPod to keep him going mile after mile.

What’s your current running aim for 2015?

My main aim is to keep enjoying it, because whether I’ve come first or last, I’ve enjoyed every race I’ve entered, sometimes it’s taken me a few hours after the race has finished to realise that but never the less I’ve loved every race. I know as long as I’m enjoying myself the goals I’ve set of running a sub 22 5k and a sub 47 10k this year will come. My goal for the Yorkshire marathon is to just complete and enjoy it, it will be almost exactly a year since I joined Quakers so I intend to treat it as a celebration of how far I’ve come in one year.

I don’t know if I can answer this one with great conviction as I have not experienced many races to call one a favourite I’d have to say up to now the 12k national cross country championship at parliament hill in London was pretty special, as it was just running through hilly bogs where every time you lifted your foot you wondered if you would just be wearing a sock and it suited my running somehow, as crazy as that sounds.

My first ever race, south park parkrun three days after my 23rdbirthday that’s where it all started for me I ran round as fast as I could and finished in 32 minutes exactly.

None, I’ll have a go at any race. The race that had taken the most out of me was Hartlepool cross country, I’d just come back from a month off and was so under trained but if anything that just makes me want to do it more next year to defeat the course rather than it defeating me like it did this year

Running in the countryside, I had a race in the Yorkshire dales recently and I loved just jogging along taking in all the landscape and wildlife.

Just enjoy it, don’t expect to improve without working for it and don’t be afraid to ask for help and advice with your training

I try not to think of anything and almost shut my mind down so I’m just running, if I convince myself I can’t feel pain then I won’t if that makes any sense at all, it seems to work for me

What makes you passionate about Cross Country?

For me they are the most fulfilling races to complete, hills, mud and water jumps. Even if I walk a cross country at some point during that race I’ve worked hard to get to the finish line and when I get to that finish line I know I’ll be greeted by acrowd of Quakers cheering me over it

What would you like to see the Quaker’s achieve in the NYSD events in 2015/16?

I’d love to have 100 Quakers participate over the full seasonthis year and a lot of people have laughed a little at that statement but I truly believe we can all do it this year, there is a buzz around the club about cross country this year and it’s something everyone should try

Go on, sell us on why we should do cross country this season – other than the cake!

It’s a fantastic event to be involved in, it’s all about being part of a team and supporting each other, you will never match the team spirit cross country has and it’s for all abilities. Never believe you’re not good enough to enter a race because you are. Ask everyone who has been at a cross country event, it’s great plus if that didn’t win you over there is loads of cake at the end!

Perfect everything for six months maybe sub 40, but if I was eating carrot sticks and drinking raw eggs I don’t think I could last 6 months training

I’m always desperate for a drink after a race so it would have to be water, but hopefully they might have been kind and thrown a mars bar in with my bottle of water

← October 2014: Gary Read May 2015: Neil Harrington →
We use cookies on our website to give you the most relevant experience by remembering your preferences and repeat visits. By clicking “Accept All”, you consent to the use of ALL the cookies. However, you may visit "Cookie Settings" to provide a controlled consent.
Cookie SettingsAccept All
Manage consent