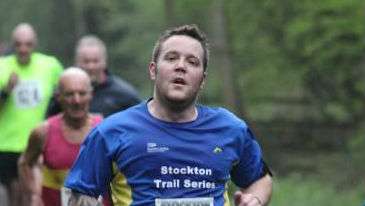 I have done the Great North Run in 2003 and 2004 (when I was a lot lighter on my feet) and thoroughly enjoyed it, I signed up for the same race in 2012 and let’s just say my time was nowhere near what I expected, this gave me the kick up the bum I much needed to rapidly change my lifestyle. Since then I started the parkrun at South Park as a starting point.

I was really quite hesitant to starting the parkrun mainly because I wasn’t sure what level of abilities participated, and I didn’t want to come last! The minute I got there I saw a few people who I hadn’t seen since school (17 years ago) and got chatting to them, the support from the marshals, race directors and Karen Newton (photographer) was second to none-these people didn’t know me but encouraged me all the way round, from then on, parkrun was a Saturday morning routine

Unfortunately after this run I stopped doing any running whatsoever due to work commitments and family life and so the weight piled on and the lethargic attitude to exercise begun.

Since I joined the Quakers in January 2014 I have upped my training dramatically, I used to run around 10 miles per week on average but now I would say my weekly average is around 25-35 miles.

I love training, whether it’s with the Quakers or having a run out myself, if I’ve had a bad day at the office etc, a simple run helps me de-stress and make me feel good about myself again, a quick sharp look down memory lane makes me realise how far I’ve come and why I need to keep the training going.

You do a lot of “different” training other than running. Tell us how running fits into your fitness programme?

I do kickboxing on a Monday and Tuesday nights as a cross training exercise to running, my main aim of starting kickboxing was just to help me gain a bit of basic cardio training and help improve my general fitness. Since I have started running it has massively complimented the kickboxing side by side as I’ve won various kickboxing tournaments at Richmond, Sheffield and York. This would never have been possible if I had not have started running.

What’s your current running aim for 2014?

My aim for 2014 is to just keep enjoying running, I’ve entered nearly every club championship and 10k league race this year and loved what each individual race has to offer. I would love to beat last year’s Darlington 10k time coming up this Sunday with it being our home run, but a race is a race and I’m just happy taking part in it regardless of the result

If I’m brutally honest I would say that Half marathon distances are my favourite (Great North Run), they allow me to challenge myself over a longer period of time, trying to sustain a consistent pace for the duration is the challenge I set myself. I do enjoy parkruns and 10ks but speed is not one of my strong points, maybe with more training I’ll lose more weight and find the love for the shorter distances  I do like mixed terrain racing also, I attend the Stockton Winter and Summer trail series which I enjoy.

Probably Sunderland Half marathon 2014, wanted to get anywhere near my Great North Run 2013 PB of 1:44:01, found this race a tough one and only had minimal glances of the Garmin. When I crossed over the line I couldn’t believe my eyes-recorded time of 1:37:49! Just goes to show that hard work and constant training sessions pay off!

I’d do them all if I could but I think my least favourite race would have to be Cowpen Bewley 5k trail race, I picked up my first running injury which side-lined me for around 4 weeks, there`s always a strange aura about that race when I go ha-ha. I still do it but always run it with a bit of hesitance. Gary – Before and After!

There`s so many to choose from, most fondest memory would have been achieving a Great North Run PB in 2013, I actually finished the race and looked at my watch and seen what I had just achieved- 1:44:01 Never felt like that before and admittedly I felt like crying with joy. It was this point that I realised I was ok at running and you got out of running what you put into it.

Tough question- I think it’s when I’m out in the countryside, whether it being on tarmac, trail, or cross country, I just the tranquillity and simplicity that running can offer. Life’s problems are really downsized when I’m in the middle of nowhere and you have time to reflect.

Either picking up an injury mid race or being injured so I can’t race- I see it happen to so many people but luckily I’ve dodged these bullets for a long time now.

Stick with it-it does get easier, many of the people who are in front of you, started off just like you.

I often think of my children and want them to see me as a role model and that it’s never too late to start a different lifestyle.

Start training with people who respect your ability, never feel like you dislike what you’re doing or you won’t want to do it again, enter small races or even parkrun that’s free and basically enjoy the atmosphere it creates, you can easily get coaxed along from the support people provide.

You’ve done a lot of races what’s your favourite type of race?

Favourite is long distance but I enjoy all races, especially now that I’ve met loads of runners through the Quakers so I enjoy a bit of friendly rivalry amongst black and white vest wearers  The ones in front of me spur me on and hopefully I do the same to the ones that are behind me (not that there’s many)

If you know me then you will laugh at this question-let’s just say I like to partake in a “few” sociable cans of Fosters on the night before race day-not sure why but it works for me and I swear by it-must be the carbs! I have tried running a race with no alcohol intake the night before and my body doesn’t function well-I feel lethargic and unmotivated. After a race, I like to have a good cooked Sunday dinner, maybe chill out with the family and have a drive somewhere to get a lemon top or something sweet, then it’s back home for a few well deserved Fosters to reflect on the day’s work

How did you get into being one of the “faces of Darlington parkrun”?

I saw that one of my friends liked a parkrun status-I clicked it and seen that it was a local event and thought I’d give it a whirl, must admit it was a spur of the moment thing but it was the best decision I have ever made to changing my lifestyle. From then on I just turned up week in week out and met some wonderful, inspiring people who helped motivate me even further.

What’s the best thing about parkrun?

The people and the support, doesn’t matter which part of the course you’re at, there’s always a marshal or run director shouting encouragement at you, the fact that people give up their spare time to volunteer so that this event can take place is fantastic, since I started in February 2013 I have seen the event grow and grow and have record attendance, even parkrun tourists comment on what a great venue we have-spread the word!

Tell us something funny about parkrun – what’s made you smile the most?

The funniest moment I know from parkrun was when fellow Quaker Nick Mason was run director-watching him keep his p`s and q`s in check had to be seen to be believed-very funny! Other than that Karen Newton has made me smile on numerous occasions with capturing funny race faces or even my cartwheels around the course, so good to be able to look back at what you have done and where your journey has took you.

At the moment I would love just to break sub 43 minutes but if I was to go all out, full serious diet and nutrition etc, I would love to be able to break sub 40 mins- its far far off at this minute in time but who knows what the future holds. For me the key thing is just to enjoy what you’re doing, I love to train but also like to have a little time to myself at the weekend and have a couple of cans and chill out as a reward. It’s my little treat to myself for the work I put in mid-week ha-ha

Boring answer but I’d say water, I’m not one for fruit (as you can probably tell) but I not particularly fond of chocolate either, goodie bags for me are not a necessity, I like a medal or a t-shirt but ultimately I like to be able to view and download my results and that’s the trophy for me, seeing the progression, onwards and upwards.

← May 2012: April Corbett April 2015: Phill Hall →
We use cookies on our website to give you the most relevant experience by remembering your preferences and repeat visits. By clicking “Accept All”, you consent to the use of ALL the cookies. However, you may visit "Cookie Settings" to provide a controlled consent.
Cookie SettingsAccept All
Manage consent