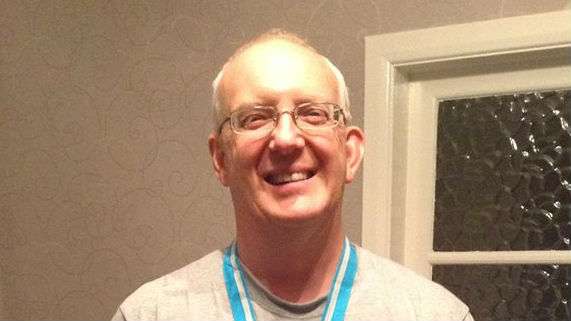 Have always taken part in some sport activity but by around 2004 had got into a bit of a rut and felt as if was vegetating and I was piling on weight. I have a friend at work that had run for a number of years, who went out running every dinner time and invited me to join her. Started by going out myself first so I didn’t embarrass myself, built it up to 3 miles, went out on a run with her and totally embarrassed myself by stopping and walking short bits three times! It was hard work but loved every minute of it, so tried again a few days later and got around same route in one go.  Have run ever since and never regretted it.

Had three young children and loving wife and wanted to keep fit for my family. I work in Barnard Castle and there are some great quiet country lanes and bridleways around the area and to be honest it was just a relief valve being able to get away with friends for an hour idly chatting but also getting fit at the same time.

Tell us about some of the races you have done in the past few months.

I competed in the GNR 2014 for the 7th time (very over hyped, overpriced race, but still love it every year for the atmosphere – something you have to take part it to appreciate) got an average time and disappointed, so immediately entered Redcar Half Marathon where I ran 1.44.30 which was my best for over 6 years. I’d had a good start to 2014 where I had PB’d at 5k, 5 mile, 10k and 10 mile but after Redcar felt as if nothing was left in the tank. Wound down 2014 with the Guy Fawkes 10 mile (hilly parts but very scenic and great run) and the Leeds Abbey Dash (fast 10k if looking for a good time). Started 2015 with the Snake Lane and Thirsk 10 mile runs (both good training runs for Spring marathons), Hartlepool Marina 5 mile (good flat run and perfect step up for intermediate runners from 5k runs). More lately took part in the Sheffield Half Marathon in April (tough uphill section from 2 – 6 miles for an average club runner like me!).

Like to get to club as much as I can as the sessions are structured and varied, and make it easier for me not to say no. Also do 3 – 5 mile runs two / three dinner times during the week with friends at work and try as much as possible to get a longer run in of a weekend if not competing in a race.

Strangely I do love training, but I do think you really have to mix it up otherwise it becomes a bind. The club sessions are what you want to put into and get out of them – but also you have to make sure not to forget to enjoy them. Have had friends training for early 2015 marathons and it has been great joining them to “do the miles” and varying the pace rather than trying to do race speed every time.

What’s you current running aim for 2015?

Always said I’d never do a marathon, but watched VLM 2014 and decided I needed to try before I got too old. Didn’t get in VLM for 2015, but got entry in for Yorkshire Marathon in October 2015. Will be doing other runs in 2015 but focusing training around the marathon.

I do like a challenge every now and again, but probably a flattish, interesting road 10K would have to be my preferred race. Not many of those about though.

What race performance are you most proud of?

Has to be Redcar Half Marathon 2014 – reminded me that I could still compete at the level that want to be at.

What race would you have to be forced to do at gun point?

I have lots of friends who do off road and they have my utmost respect. I’ve had a few injuries over the past few years and I now need something flat and firm under my feet. I can manage with trails, but sorry cross country / fells just fill me with dread.

Probably my first GNR in 2005. Ran it in just under two hours and was the furthest at that time I had ever run. Felt elated for weeks.

Love running with friends and especially out of town. Nothing better than a long run, breathing in clean countryside air on a sunny day.

I’m not built for speed, and not really done much track running but the thought of doing lap after lap as opposed to something more challenging out of town doesn’t really appeal.

Join a running club! I knew Diane Adkins from before she joined the Quakers and every time I saw her she kept advising me to join.  I’d ran socially with friends for years and didn’t think a club could do anything different for me – I was totally wrong. The club won’t do it for you but will give you the tools and opportunity to help you improve. Whether that is you training harder, or just running with people of a similar pace so you can encourage each other along. You do need however to have a personal goal and aim whether that is just to keep fit, or want to run faster / further or to go on to compete in some races.  There is nothing more satisfying than competing in your first race or better than finishing and being cheered along by friends from your own club.

I personally used to find it mentally very hard doing new races, not knowing the route and exactly how tough it was going to be – psyched myself out lots of times. I try now to be more proactive, find out about the run prior by asking advice from people who have done it before, or researching the internet so I am forewarned. Also during the run I try to use the mileage markers and / or Garmin so I know how far I’ve done and still to go, so I can break it down into manageable mental chunks.

Best way to relax / reward yourself after a race?

Once I’ve got home like to have a long soak in the bath.

If you were given 6 months of professional training, nutrition, and perfect health – how fast could you run a 10K?

← April 2015: Phill Hall February 2016: Paul Ryan →
We use cookies on our website to give you the most relevant experience by remembering your preferences and repeat visits. By clicking “Accept All”, you consent to the use of ALL the cookies. However, you may visit "Cookie Settings" to provide a controlled consent.
Cookie SettingsAccept All
Manage consent