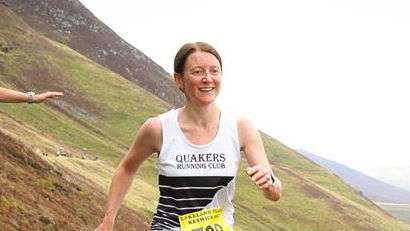 I used to aim to run for a mile on a treadmill about 10 years ago and then I entered the Race for Life to raise money for Cancer Research and decided I wanted to run it and not walk at all. After that I would do 2 or 3 Race for life events each year, the Raby castle 5K and the Darlington 10k. I would go along to the races Anthony was doing and take photos of Quakers until one day in a post-race gathering at Quaker House I was coerced by some of them (you know who you are) into going along to the training sessions. That was summer 2010 and now I am a running addict!

Knowing I had lots of sponsorship to collect for a good cause.

Most weeks I will do the Quaker training sessions and a steady run over the weekend.

Most of the time yes, you would never run up and down the same street by yourself.

What’s your current running aim for 2012?

The Lakeland trail races which are varied distances but often around 15-18k. The views on a nice day are fantastic.

Thunder run, I went last year wondering how I would do more than one 10k in a day as at that time I didn’t even run on consecutive days. I did four 10ks, two of which were in the dark and both were faster than the ones in daylight.

Aycliffe 10k, it is so boring.

Winning the 10k league in my first year of doing them.

That will be finishing a Thunder run lap in the middle of the night and going straight for the steak and onion baguette!

The thought that I might run the wrong way and get lost.

Don’t think that you have to be fast to do the sessions, anyone of any speed can do them. Just join in you will be fine and no one will yell at you if you don’t do the number of laps that are set.

Knowing that when I have get to the end that I will be glad that I did it.

Do Parkrun to get an idea of what happens at an organised run. Then enter a 5 or 10k and go for it, a lot of people seem to think only really fast people run “races” which is most certainly not the case.

The longer trails, there is less pressure and it’s fine to walk when you need to and you have no guilt in doing so.

A nice meal and a glass of wine, after all that running I deserve it.

The people, I have made some great friends since joining the club.

What is your favourite training session?

I used to like Coniscliffe Road and Salutation road but we don’t do that one anymore.

I’d like to think 45 mins but with my legs I don’t think so!

Definitely the water, although Chocolate milk would be good.

← July 2012: Julie Whinn October 2014: Gary Read →
We use cookies on our website to give you the most relevant experience by remembering your preferences and repeat visits. By clicking “Accept All”, you consent to the use of ALL the cookies. However, you may visit "Cookie Settings" to provide a controlled consent.
Cookie SettingsAccept All
Manage consent