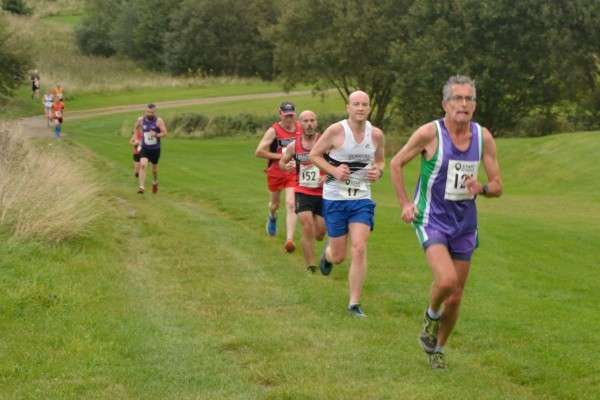 My three favourite races all seem to fall within a five week spell right at the end of summer. This is the middle one, held just up the road at Sedgefield. It’s a 6.5 mile trail race held on the outskirts of the village and is a great little local run to support.

The race HQ is located at Sedgefield Cricket Club, and given the small field, parking is never usually a problem. There is also a small group of runners from the running club in Sedgefield’s twin town of Hamminkeln in northern Germany, who seem to coincide their annual visit with the run. In fact this year saw their mayor starting the race (which was slightly delayed due to cows in a field, but more on that later!). road, which brings you out into Hardwick Park. If you’ve done either the parkrun or relay event there, you’ll recognise the parts of the path you run along, including passing the statue of Neptune in the smaller lake. For some reason, this always reminds me of the frog king in the video of Paul McCartney’s “We All Stand Together” and invariably I spend the next five minutes with the song going round in my head! From there you head west out of the park and onto the first proper trail part of the route.

It was at this point the cows appeared (which are never usually there). There was the funny sight of the marshall trying to herd them away, but of course when the runners appeared they then started to run alongside us, in the same direction. At one point I thought they were going to cut us off, but thankfully they stopped before that as they came across the feeding station!

Leaving the open fields for a while, the noise of the cows was replaced by the noise of quad bikes as you run on the path alongside the bike track for about a kilometre, before coming out on the fields once again to make your way up the slightly uphill section towards the outskirts of the village of Bishop Middleham, at which point you make a sharp turn right to then slowly head back home.

The water station at the style you have to hop over signifies the start of the nice downhill section which leads to my favourite part of the course through the trees. It’s a single person width track which weaves its way through the forest and for a couple of minutes you can almost forget where you are. You then briefly come out into the open as you run downhill through the golf course before turning back into some woods once again. Exiting them, there is a short section on a country lane which then brings you out at the back of the Hardwick Hall Hotel. From there the route takes you over the field before joining the path round the lake.

Running this in the reverse of the parkrun route, you then come full circle to re-join the paths round the smaller lakes, to run in the same way you went out. The only downside is the hill you ran down at the very start is the same one you have to run uphill to finish. For the last two miles of the race I’d tucked in with two runners from Billingham Marsh House and we certainly pushed each other on during the closing stages – the final hill enabled me to see one of them off, but not the other! If you’re thinking of trying a trail race this is a great run for a first one. I’d recommended it to two people from work who both thoroughly enjoyed it. The field this year was about 150 people, which means you never find yourself jostling for position like you can at some races. It’s also easily accessible for those who don’t drive either as you can get the bus from the town centre, which drops you right outside the cricket club. It’s a relatively cheap race too – the entry fee this year was just £10, which includes a goodie bag, as well as some nice cakes at the end (admit it you’re impressed I’ve waited until the very end of this to mention food!).

← Race Report - LDWA Hadrian Hundred Race Report - GB Ultras, Race across Scotland →
We use cookies on our website to give you the most relevant experience by remembering your preferences and repeat visits. By clicking “Accept All”, you consent to the use of ALL the cookies. However, you may visit "Cookie Settings" to provide a controlled consent.
Cookie SettingsAccept All
Manage consent