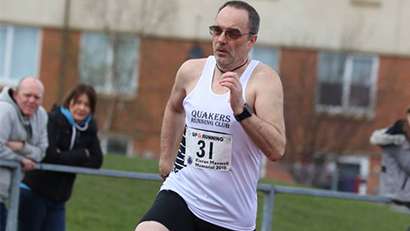 For me this T & F race started way back in October 2017 when I decided that I was going to take track running seriously as I was struggling with my return from injury on the road so I attended my first Track Session with Michael Doughty. I regularly attended the sessions and took on board what I was being taught and advised what to do. I also went once a month to see a sports physio for what I call maintenance of my leg muscles (and continue to). The culmination of all this training was to run my first serious track race, I decided to take on the 400 & 200mtr races at the first available T & F race which in this case was the Kieran Maxwell Memorial Race.

Fast forward now to 8th April and race day, I arrived at Eastbourne Sports Complex at around 9.15 as I had arranged to warm up with another competitor. I registered, and my first thoughts where, as I walked onto the track, “where do I start for the 400mtrs?” I knew it would be a staggered start but not sure where the different start lines where located. My warm up partner arrived and we warmed up together as his race was at about 10.15-10.30 so we went through our warm up routine which lasted approximately ½ an hour. My first race was at about 11.40 so I had to do another warm later on. Whilst waiting for my race I thought about how I was going to run this race as you can’t go flat out all the way. The idea was to try and get a good start and get into my stride within the first 50mtrs and find a comfortable pace that I could carry all the way to the 200mtr mark where the idea then was to push up the pace around the bend so you had a good start on the final 100mtrs where things could either all fall into place with a good finish or you just slow down because you have nothing left to give.

The time finally came for my 400mtr race so we all gathered at the main start line to find out which heat we are running in and our lane numbers. I got allocated heat 3 along with 4 other runners and lane number 3, out of the other 4 runners I knew I could beat 2 of them only and be close to one of the others, but that didn’t matter It was more about time for me. I watched the first 2 heats so I could work out where my start line was so when it came to my heat I at least knew where to start. The time came for my heat, I approached my start line in lane 3 and looked to see where the other runners where in comparison me in lanes 2, 4, 5 & 6. All I could now hear was the officials shouting out instructions “Runners stand back from you start line by 2 meters, on your marks, get set” I was stood waiting for the gun (I’m not confident in the crouched start yet) BANG the gun went off and I set off. By the time I got to the first corner I was well into my stride and I could hear the guy in lane 2 beside me, out of the first corner and onto the back straight I could see everyone in front of me due to the staggered start and the guy in lane 2 overtaking me. I got to the bottom of the back straight at the 200mtr mark and realised I’d caught the guys up in lanes 5 & 6, I pushed on round the bend & left them behind I was now in front of them. The final 100mts came up and I could feel my arms and legs getting heavy as I reached my lactate threshold. I pushed on and for a split second or two it felt like I was catching the 2 runners in front of me so I pushed a little more to keep the momentum going. I finally lost my form but kept pushing for the line that seemed to take an age to reach. I finally got there and sank to my knees as I crossed the line (I knew I’d given it my all). I got up from my knees and shook hands with the other runners and walked round the track to walk off the lactic acid in my legs, I now had about 3 hours to regain my strength and energy levels for the 200mtrs. Shortly after the race the times where announced to which I was chuffed to bits as I realised I’d got a PB and new Club Record.

Time for the 200mtrs approached so I decided to walk over to the start line and gather with the other runners who were congregating and warming up. I had decided just to go for it and see what happens as my legs felt like lead weights. I started my warm up and decided I need to do a lot of stretching rather than drills (my legs felt dead) I tried a couple of progressive acceleration sprints up to about 50% and discovered that my legs didn’t feel too bad after about 6 reps. We gathered at the start line to find which heat and lane we would be running in. The heats were time graded which I was pleased about, I ended up in the 3rd and last heat and drew lane 4 (again it was a staggered start). As it got to my heat I wondered what I was doing here as I was running with seasoned sprinters and runners a lot younger than me but those thoughts soon passed as it was my turn. Again I listened for the instruction and the gun. The gun went and I launched myself forward and got my stride and just went for it. Coming of the bend and onto the 100mtr straight I was in last place and pushed on. I managed to pass the runner in front of me at about 50mtrs from the finish, I was determined not to be last and pushed again and manged to pull away and stay in front of him. I asked my son Philip to go and find out my time as I was absolutely shattered. Philip came back with my time of 30:34, I didn’t realise till much later on that day that it was a PB and a new Club Record.

All in all a successful day and all my hard work over the last 6 months had paid off (I had hoped my times would have been quicker but never mind).

← Race Report - Ullswater "Dirty Double" - 14-15 October 2017 Race Report – Regent’s Park Summer 10k →
We use cookies on our website to give you the most relevant experience by remembering your preferences and repeat visits. By clicking “Accept All”, you consent to the use of ALL the cookies. However, you may visit "Cookie Settings" to provide a controlled consent.
Cookie SettingsAccept All
Manage consent