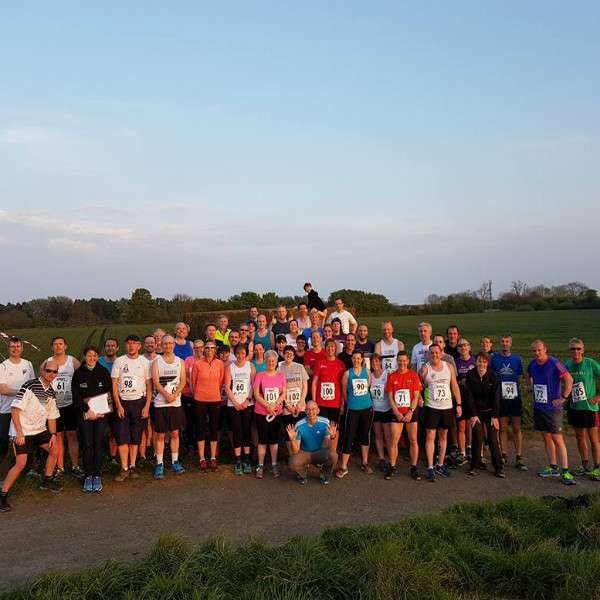 Heaven is a trail race on an evening in May (you may attribute that to me on Wikipedia when I am long dead and gone) and it appeared that 47 Quakers agree with me.  Actually make that around 60 as I think the people marshaling or otherwise shouting encouragement probably enjoyed it even more.  Fortunately the gods of running smiled on us and the weather was warmish and dry for those who had to wait over half an hour to set off (I think this may have been because we propitiated them by generously watering the trees).

The handicapping system is becoming a bit more fine-tuned, to the extent that it got a bit frantic recording times and positions as most runners came in close together.  First home was Chris Parsons, followed by Gilly Cowton and Rachel Harrington.  Fastest on the day was Kyle Cook.

As always, there are a few things that stood out for me.  Diane Vaughan might just have discovered a new state of anti-matter. She brought three boxes of energy balls that were free of everything you could possibly think of, except energy.   I was a little deterred by the fact that they resembled the droppings of a giant Lagomorph but they did taste rather nice.  (So maybe rabbits eating their own droppings isn’t as weird as it seems.)

The highlight though was Michelle Scruby’s face coming into the finish.  That look of pure satisfaction that, try as they might, Ian Readman and Kyle Cook were not going to catch her.

← April 2017 achievements May Achievements →
We use cookies on our website to give you the most relevant experience by remembering your preferences and repeat visits. By clicking “Accept All”, you consent to the use of ALL the cookies. However, you may visit "Cookie Settings" to provide a controlled consent.
Cookie SettingsAccept All
Manage consent