In what is the Quaker’s 25th anniversary year, joint second- longest serving member and Quakers legend, Parky, tells us something of his own running history. 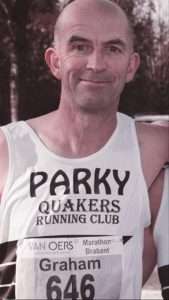 As far back as I can remember I have always ran.  Having a good aerobic capacity was probably down to doing the shopping in town with my mam every Saturday, she used to jump on the bus home and I’d try to reach the bus stop at the top of our street (approx. 1 mile), so that I could carry the shopping from there to the house, this also taught me how to pace myself just in case a sprint finish was required.

Always being up for a challenge, when we were out playing in the park I would give the other kids a start, then try to catch them up over 1 lap (Lactate threshold, approx. 400m x decided on how many kids were out playing).

When and why did you join Quakers and what is it that’s kept you paying your membership all these years.

I played football for Darlington College from leaving school until my third daughter arrived in 1994. Being unable to commit the time to keep playing, going out for a run on my own was the best option. This was until an article appeared in the Darlington Advertiser, (a local paper that was delivered on a Wednesday), regarding The Quakers Running Club with my former manager of the College football team Mike Horan being mentioned. I gave Mike a call, had a chat and was persuaded after Mike told me that I would have no problem keeping up with the rest of the group. I can still remember all 10 or so members who were in attendance at the first session everyone was so friendly and welcoming. In them days we got changed in the porta cabin changing rooms at The Cleveland Bridge Sports & Social Club

Now having moved into my 24th  year with the club it’s just a natural thing to do. Looking back at all that I’ve achieved while being a member, secretary, chairman and coach, all the different places that I’ve been, the friends I’ve made, the friendly rivalry between members, which of course stops once over the start line, and starts again once over the finish line and the atmosphere that’s created by the 10k leagues/ club championships, what else do you need. My proudest moment with regards to putting the club into the public eye was forming the primary school x-country championships with the help of Wayne and Dawn Bramley, Alison Raw from the schools sport development, club volunteers and not to mention Mount Pleasant Primary School where it all started.

I love to do 4 quality sessions per week, 1 long run, 2 club sessions and a Strength & Conditioning session, unfortunately it’s been a while since I’ve had the opportunity to do that, even while we’ve been in lockdown. 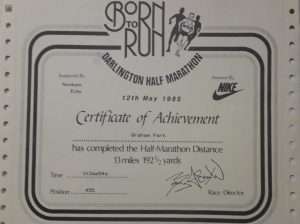 My first half marathon result

Yes, favourite session has to be Dusty Bin 3-2-1; it’s ideal for new members to have a go at to experiment with different speeds. Remembering the very first time doing this, the advice from coach Kevin Shevels was not to go out to fast on your 1st loop of 3, I found out why. Never made that mistake again. When I’m training for a certain race, the aim is to build my training into the club sessions, plus a long run and some Strength & Conditioning. Using the 10/12 min mile groups as a recovery run when coaching.

As previously mentioned, I played football until my 3rd daughter arrived, used to go to the gym, played badminton, squash, golf, cricket, and rugby in the past. 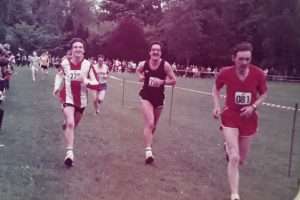 Unfortunately, at the time, that red and white striped shirt was all that I had available

Running after the grandchildren when the chance arises.  Watching most sports, especially if England or Team GB are involved. Started doing quite a bit of walking while we’ve been on lockdown (aerobic session).

Superslog.  Ran this with one of my brothers while at secondary school. As a team of four we had to run with a log over an assault course somewhere near Guisborough woods, in order to be awarded with the certificate below. 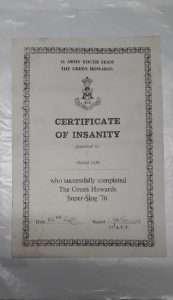 New Marske Coast Road 5k, during my first year at the club I ran both the spring and autumn 5k and managed to finish both races with the same time, thought they’d given me the results sheet from the spring race until someone pointed at the date on the sheet. (Has this happened to anyone else?)

Sheffield Marathon was my first marathon, was to be my only marathon too. Aiming for sub 3hr 30 unfortunately had to have a toilet break at 25miles, eventually finished with a time of 3hr 30min 33secs, was gutted. When I fell over the line at the end, a lady from the St Johns Ambulance ran over to ask me if I wanted to get onto her bed, I replied “ did you have to wait for me to run 26 miles before you offered me that”

Amsterdam Marathon Everyone dreams of the perfect race and this one has to be a contender. Probably the best running conditions you could wish for to run a marathon in.  Training had gone well, I’d set a pace that was realistic to run at and checked it every 10k point, the last 2 miles were a dream. The fantastic feeling of entering the old Olympic stadium, with a large crowd and a big TV screen with you on it, put the icing on the cake.

X-Country, Roundhay Park This was my first attempt at the national x-country championships, I can only describe it as an amazing sight, 2500 runners, it was like the charge of the light brigade, unforgettable.

Fell Race Middleton in Teasdale.  My one and only fell race, one that the club organised, always said I would never do a fell race, it was 1.5 mile uphill touch a wall and run back down, how I didn’t break something I’ll never know, came back into the high street in 3rd place but timed my sprint to perfection and came 2nd not only surprising myself but my club mates too.

Village 10ks All the local village 10ks are a joy to run in. You can always smell the home-made cooking when coming along the finishing straight, just to make you put that little bit extra in.

Having been diagnosed with Hypertrophic Cardiomyopathy, (thickening of the heart wall) in 2017, just being able to get back into training 4 times a week and aiming to keep my times as near as possible to those of the previous year will be an achievement. Also, keeping Rob Gilham and Phil Clarke within sprinting distance of the finish line.

What are your long-term running goals?

Being able to train to complete another marathon and to run in various races on different terrains  not attempted before.

My mother used to say you don’t know what you’re missing till you’ve tried it. Everyone should have a go at everything; Long/short distance, Road, X-Country, Fell, and trail running.

Finishing 10th in the Darlington secondary school X country in my final year at Eastbourne school, to achieve this I had to cut through the corner of a flooded field (legally), to gain advantage over a few competitors in front, and not forgetting the familiar sprint.

Winning Aycliffe Handicap, this was also in my first year at the club. Keith Shevels invited me to go along with him; managed to win by a then record points score and earned an invite to their presentation night.

Finishing 2nd to Martin Scaife when he was at his peak, (winner of D’ton 10k) in a race over near Cowpen Bewley. Had to have the now familiar sprint finish to come 2nd overtaking a chap from Billingham Marsh House in the last 100m.

Playing football when I left school instead of keeping up the running, although I may have become a lifelong member of the Harriers, or one of the founder members of the Quakers.

Running 2 marathons in the space of 6 months, I suffered badly with motivation over the following 9 months and had a few DNFs,(Did not finish).

How many pairs of trainers/ running shoes do you have, and do you have a favourite pair?

Usually brooks but whatever is comfortable and are reasonably priced.

What is your idea of running heaven?

Running off road, away from the noise and fumes of traffic. Really enjoyed my legs of the Cleveland Relay a couple of years ago, will be looking to be part of a team in the future as it is an amazing day out.

What is your idea of running hell?

I’ll always remember Kevin Shevels, (Founder member of the club), I was talking to him about getting headaches, and he said see if you get them the morning after training, if so, you’re not re-hydrating properly after the session the night before. Never had any more trouble after that.

We live in an age now where everyone uses technological gadgets to track everything. Try not to get too attached to it. Run technology free.  Don’t be surprised when your body starts telling you that you’re going too fast, like your gadgets.

As mentioned previously run on all the different types of terrain, vary your routes (alternate your direction if you do the same routes all the time).

Do the talk test – go out with a friend and make conversation, if you find that one of you is struggling to talk then the other person needs to slow down. However, this may be due to the other person not letting you get a word in!

Gradually build your fitness levels up. I’d been at the club 6 years before having any thoughts about the M word (take a guess what the M word is?). During my early years at the club 5k, 10k, trail and X-country along with the odd half marathon, were the only races I took part in.

Always take the recovery between reps; it’s there for a reason!

Having Rob Gillam or Phil Clarke in front of me especially if it’s in the 10k or club championships.If it’s anything other than X-country, you just have to remind yourself how hard those X-country races were and why you were doing them, just say to yourself, THIS IS A LOT EASIER.

If it’s a training session just getting home, having a shower then having tea is enough for me. If it’s a race, socialising over a couple of pints with club members/other runners. Do like the cakes at X-country though. 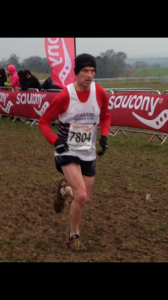 Well that’s all folks, hope you’ve enjoyed the read and haven’t fallen asleep. Looking forward to seeing everyone back training when the time comes.