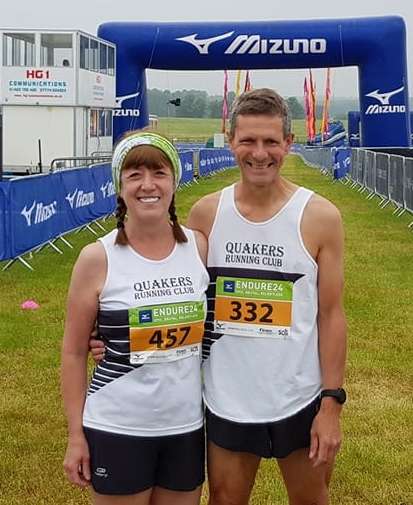 Quakers were out and about on a variety of terrains and distances once again over the last fortnight. 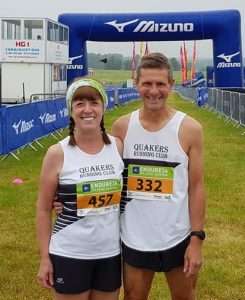 Gill Colling & Phil Rutter ready for the off the the 24 hour race.

The previous week had seen Gill Colling and Phil Rutter head to Bramham Park in Leeds for the Endure 24, held over an 8K lap around the park. In 24 hours, Gill covered 12 laps (to also set the club record for 24 hours for her age category), with Phil covering 17 laps.

Midweek had seen the Children with Cancer 5K taking place in South Park, on a route mirroring that of the parkrun. Gary Read completed the three lap route in seventh place overall in 20:40 along with Rob Gillham (22:11), Fred Tennant (22:23), Rachel Maddison (27:47) and Wendy Thompson (41:01).

Dave Thompson was out on the fells for the Pennine Way 39, on a route which covered the Pennine Way from Middleton in Teesdale to Alston and took in High Force, Cauldron Snout and High Cup Nick. He completed the 30 mile route, with 6000 feet of climb in 9 hours 47 minutes.

Ross Edmond was the sole Quaker at the Harrogate 10K, completing the multi-terrain route there in 1:08:30.

A group of runners also headed over to the Lake District for the latest in the Lakeland Trail races taking place in and around Ambleside. In the 55K Ultra, Rebecca Howard completed the route in 8:03:25, just ahead of David Aiken in 8:20:01. In the 23K distance, Dawn Richardson came home in 2:26:07 along with Andrew Dixon in 3:48:21.

Down the road, Emily Beaumont was at the Hey Up It’s Helmsley Ultra, a 32 mile route held around Helmsley itself and the Trans Pennine Way. One of only five people to complete the race, she finished in 6:50:33.

← Press Report w/e 27/06/2021
We use cookies on our website to give you the most relevant experience by remembering your preferences and repeat visits. By clicking “Accept All”, you consent to the use of ALL the cookies. However, you may visit "Cookie Settings" to provide a controlled consent.
Cookie SettingsAccept All
Manage consent