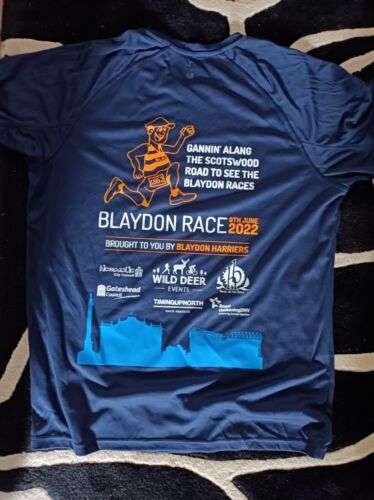 It has been an incredibly busy first half to June, with Quakers taking part in events over a variety of distances and terrains.

The Wild Deer Alnwick Castle trail was the first race of June. This 10k trail race started outside the Castle by the River Aln and took in a fabulous lap around Hulne Park, the private estate of the Duke of Northumberland. Kathryn Plant was our only Quaker taking part, travelling midweek and completing it in 1:06.

The Wharfedale Trail Half Marathon (13.2 mile trail race) was completed by Abbie Hull (2:15) and Malcolm Hewitson (2:41) who took the opportunity to enjoy a great day out in some of Wharfedale’s finest scenery with over 2,000 feet of ascents, following well established footpaths, including the Dalesway and Mastiles Lane and taking in the fabulous views from Scott Gate, Mastiles and Boss Moor.

The annual Swaledale Marathon passes through some of Swaledale’s finest scenery. The 24 mile course is a fell run/challenge walk event and competitors must navigate themselves and complete the course within 10 hours. This year, a very challenging westerly wind made it tough going on parts of the route, but 5 plucky Quakers completed the race well within the cut off. Abbie Hull was first Quaker home in 4:39 followed by Sandra Cass and Anthony Corbett (5:39), Malcolm Hewitson (5:42) and Julie Bell (8:42)

Chris Land was our sole Quaker completing the 15k Trail Challenge in 2:12, following footpaths and bridleways taking in panoramic views of Coniston Water and the surrounding peaks of the Old Man, Swirl How, Wetherlam and Dow Crags. Meanwhile, Philip and Lesley Neal completed their first race at The Lakeland Trails weekend, completing the 10k Trail run in 56:56 and 1:16 respectively.

Racing at the Lakeland Trails weekend continued. Described as the Runners’ World magazine as ‘the most scenic trail Marathon in Britain’, the Lakeland Trails Marathon takes in a complete circuit of Coniston Water taking in the  idyllic beauty of Tarn Hows and the elevated Beacon Tarn with panoramic views of Lake Coniston and surrounding peaks of the Old Man, Swirl How, Wetherlam and Dow Crags. Rebecca Howard was our only Quaker taking part and finished in a very impressive 4:20, taking the prize for 2nd lady. Meanwhile, Philip and Lesley Neale completed their 2nd Lakeland race of the weekend, the Mini marathon 10k, which utilises the old Torver Trail route which started and finished from Land’s Point in Coniston. Philip took 3rd place in 57:42, followed by Lesley in 1:12.

With a start line on Bawtry Road and a finish on the World Class UCI cycling track, Michael Oliver completed this ‘must do’ Half Marathon in 2:02.

12 QRC members completed the entire Cleveland Way, starting at Filey at 5am with legs varying between 3.5 and 8.5 miles. Running in mixed weather conditions, several members ran 2 of these very challenging sections.  A massive well done to all of our runners and also a big thank you to Mark C, Wendy C and Sarah B who organised the event and supported runners on the day.

This picturesque, rolling course started and finished just outside of the village, with great views of the historic North East landmark, Bamburgh Castle. Sole Quaker, Rachel Grayson, completed the race in 1:01.

The Muddy Roads midweek Summer Trail Series continued with Race 3 over at Lordstones. A QRC Championship race, this multi terrain course had a few up hills along the way with breath taking views.  Rob Gilham fought hard to be first Quaker home and taking 50 points with his finish time of  25:48, with Simon Rek 3 seconds behind him in 25:51. They were followed by Viv Hardwick (26:44), Helen Clark (30:08), Kathryn Plant (32:58), Michelle Dale (39:25) and Alison Hardwick (46:18)

← Press Report w/e 11/07/2021 Press report - 15th - 29th June 2022 →
We use cookies on our website to give you the most relevant experience by remembering your preferences and repeat visits. By clicking “Accept All”, you consent to the use of ALL the cookies. However, you may visit "Cookie Settings" to provide a controlled consent.
Cookie SettingsAccept All
Manage consent