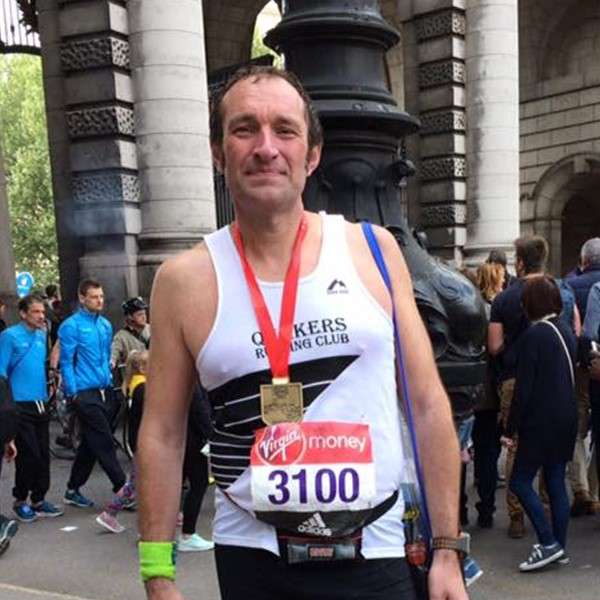 He’s run at two of the four corners of the earth but what got him started in the first place?  Rob Gillham tells us his running story.

I originally started running whilst at Secondary school, as I was no lover of rugby or cricket (the only 2 options the school offered other than cross country), so was faced with little choice initially. However, getting out and running through the woods was good and eventually I got to a level where I represented the school at district events. After leaving school I started playing squash and that took over from the running for many years; until about 12 years ago during a very hard-fought match, all the muscles at the base of my back gave way. After almost a year recovering I tried to play squash once more but my back told me otherwise, so I took up running again and entered a few races. Someone I knew through work was a member of the Quakers at the time, so invited me along and I’ve been a member ever since.

Initially at school, it was the avoidance of sports I didn’t enjoy, but when I took it up again it was the knowledge that each time I went out my times and pace improved bit by bit and with each race I entered, my times got a little better gradually.

I try and attend both club sessions as often as possible and usually do the main session, as I find they really benefit my fitness levels. I also try and do parkrun as many Saturdays as I can. After that it depends on what races / events are on each week. If there is a midweek race I usually do that, if not then the military boot camp in South Park as I find that helps with core strength and then on a Sunday either a race of some kind or if there is nothing on (which is not many weeks of the year), then I will go for a longer steady run.

Most of the time, I have to say I do. I find that training with others makes me do sessions I would not normally do on my own. However, like everyone I suspect, dragging yourself out the house on a cold, dark, wet winter’s evening certainly takes more effort than a nice warm sunny summer night. As mentioned above I try and do the military style boot camp once a week if there are no other events on and in winter I do try and get to the ski slopes at least once in a season.

For anyone who knows me then they will know I have a huge love of all things music so attending as many gigs in a year is always a priority. This year it should number over 20 and I am also a regular attendee of the Glastonbury festival.

I have done too many 5k and 10k races to remember but always do the Darlington 10k and the Tees Pride 10k every year. I have done the Great North Run for the last 10 years and a few other half marathons such as Redcar and the Brass Monkey. After 7 years of trying I finally got a place in the London Marathon in 2017. Also I have taken part in 2 of the early Thunder Run 24 hour endurance races (now the Conti-Run) and for the last 3 years have done the Roseberry Topping fell race and this year for the first time the Reeth Show fell race. Also, I try and do some of the cross-country season races.

To complete as many of the club championship races as possible and try to amass over 1000 cumulative points for a season.

Having completed my first marathon in 2017, I realised that if you complete all 6 majors (London, Tokyo, Berlin, Chicago, Boston & New York) that you get a very special medal. So, if at all possible I would like to try for that; however as some of these races are even harder to get into than London then watch this space as it may not materialise. Also, I am one of the few Quakers who doesn’t seem to have a Hardmoors tee shirt in their ever burgeoning collection, so I would like to add at least one to my wardrobe.

For some it is their least favourite race, possibly due to the sheer numbers involved or the entry cost, but for me it has to be the Great North Run. From the moment I get on the Metro at South Shields to get to the start line, being part of the crowds during the build-up to the start, the actual race with all the different club, charity and fun runners, the support all the way round and the exhilaration of crossing the finish line it is a great day out. But over the years I have come to enjoy all sorts of races, distances and terrains and being ankle deep in mud during the cross-country season can be equally good fun (unless it is as cold and snowy as the Northern’s a few years ago at Sedgefield)

For someone, who for years vowed never to run a marathon, to cross the finish line in London in a reasonable time was the greatest achievement so far. Also standing on the steps outside Binns every year before the start of Darlington 10k and seeing the number of black and white vest increase year on year always makes me proud to be part of such a great club.

Not realising for a few years, the positive benefits of a good sports massage on a regular basis. For the first few years of running I was plagued by a few niggles and a few more serious aches and pains which I thought I could either run through or painkillers would mask. Now I know better and make sure I try and get a professional sports massage every 3-4 weeks or more frequently if I’m doing more training for a big race.

I only use one pair of road trainers at a time (always Asics Gel Kayano) and always change them after 500 miles. I also have a pair of trail shoes and a pair of spikes for the cross-country season.

Ideally, I would like to be running through the countryside, with lovely views, preferably on the flat or downhill when it is sunny but not too hot with some good music in my headphones to keep me company. Either a multi lap race with little or no scenery or a training run on a cold, wet, winters days when really all you want to be doing is sat in-front of a nice log fire with a cup of something hot.

Listen to your body, if it starts to hurt then stop and if your minds not in it then stop. Always enjoy what you’re doing otherwise it becomes a chore and then the enjoyment is no longer there.

Take it steady, build up the distances gradually, take plenty of advice from as many people as possible and most of all have fun. Not everyone is built for certain distances, speeds etc. Find what you are most comfortable with and maybe try other things, but if they are not for you then don’t worry, the main thing is to be a runner or some kind or another.

The thought of crossing the finish line and knowing that, despite everything that a hard race can throw at you, when you do finally cross the finish line, you will have beaten it and can feel justly proud of your achievement.

A glass or three of a good red wine. Perfect way to unwind after any race.

I have been lucky enough to run along the beach in Kenya with the Indian Ocean on one side and palm trees on the other, I have ran around Central Park in New York and also ran the most Easterly and Southerly parkruns in New Zealand, so I guess it would be good to bag the most Westerly currently in San Francisco and the most Northerly which is currently Yakutsk Dokhsun in Russia – wish me luck!

← Member Spotlight, September 2018 – Danny Gordon Member Spotlight, November 2018 - Gemma Marshall-Moore →
We use cookies on our website to give you the most relevant experience by remembering your preferences and repeat visits. By clicking “Accept All”, you consent to the use of ALL the cookies. However, you may visit "Cookie Settings" to provide a controlled consent.
Cookie SettingsAccept All
Manage consent