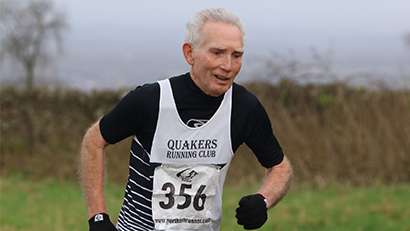 They say that time catches us all up in the end; in the case of this month’s Member in the Spotlight, Danny Gordon, time is really going to have to work for it.

I’ve always been a runner even from my earliest school days. I can remember running for my junior school at Feethams Cricket Ground and at my senior school I ran with the Cross Country team two years earlier than was the norm.

Also among my school boy memories was the opening of the Rolling Mills track (now Longfield School) When Derek Ibbotson the World mile record holder (1957) was the star guest runner and the velodrome on the outside of the track  (not a lot of people know that) was opened by Reg Harris UK’s cyclist Olympic Silver (1948). I remember also seeing at Darlington Cricket Ground the great West Indian Runners McDonald Bailey 100m world record holder (1951) and Olympic Bronze Medal (1952) along with Arthur Wint 400m Olympic Gold & 800 Silver (1948). I probably got into the ground over the boards at the back of the Football Stand.

On leaving school like most of us I found other pleasures that did not include running and of course there was not the races around like today.

So it seems I had a long sabbatical until 1984 some 34 years ago when for some reason which is a mystery to me my wife (Joy) bought me a track suit for Christmas. On Boxing Day I donned the said suit and went for a run. Joy now says like ‘’Forrest Gump’’ once I started I’ve forgot to stop and as they say the rest is history.

Because as with most people who are reasonably good at something it was easy  keeping on running and the fact that there was by then a lot of organised events helped.

It’s much reduced these days I try to run every other day for between 4 and 6 miles; as I don’t intend doing any long races this year this seems to suit me.

I’ve always found training a pleasure as I do a lot of my best thinking during these runs; you know the usual stuff putting the world to rights etc. as I’m moving along at a nice easy pace.

As you can imagine at my age I’ve done races in all disciplines Road, Fell, Trail, Cross Country and at all distances including Six Marathons, numerous Half Marathons and Ten milers and countless 5k & 10k the most memorable would be the London Marathons. Among my off road events I’ve completed in several Highland Games Hill Races, at least 10 at the Aboyne Games (Aberdeenshire). This venue is part of the Gordon Clan territory so the Head of the Clan (The Cock of the North) is always in attendance. This 6 Mile very hilly race starts and finishes in front of a crowd of two thousand or more spectators. I would recommend any one who likes hill running to try these races. This year I have greatly reduced my race entries and I’m limiting them to 10k max so a few good times will do.

Well some of you may be surprised at this but a Cross Country race has always been my favourite. Out of the North Yorkshire and South Durham league events of which our club is affiliated my favourite race is the one at Whitby. Maybe this has something to do with the Fish & Chips and a few drinks with our group after the race, where you can tell a few lies and a joke or two, all good fun. On this subject I would encourage more of our members to try these races, it’s the only ones we do as a club team and is open to all male, female, young and old. And thanks to our team captains it’s very well organised.

This has to be my two Club Championship wins.

Not really in all I have enjoyed my running and stayed injury free. Without a doubt the Swaledale Marathon I’ve ran five and always struggled.

Splashing through the mud on a Cross Country, especially since at my age I run with the girls about 5km.  It also helps knowing the younger men have to run about 10k and as they do their stuff I can watch from the side-lines.

Any race type or distance on a hot sunny day; I hate running in the heat.

Always take it steady on a training run you need to get your heart rate up but not to race speed levels and remember when racing you can’t set a PB every time. Also remember this if you get an injury, pulled muscle etc. the body will heal itself but you must give it time, usually more time than you think.

Been wise enough to know if I need to there is no shame in slowing even to a walk and for every uphill stretch there’s a down.

← Member Spotlight, July 2018 – Abbie Hull Member Spotlight, October 2018 - Rob Gillham →
We use cookies on our website to give you the most relevant experience by remembering your preferences and repeat visits. By clicking “Accept All”, you consent to the use of ALL the cookies. However, you may visit "Cookie Settings" to provide a controlled consent.
Cookie SettingsAccept All
Manage consent