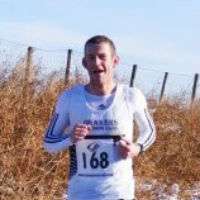 I used to run regularly whist playing football and had to run more to keep up with the young ones. From there I did the Great North run a few times then I was lucky enough to get a place in the London marathon.

The motivation to keep fit and improve times.

That would be a long list as I’ve tried most races except the endurance and LDWA events. Although the Thunder run 2011 was a great experience, it really tests you mentality and strength, but great fun and sense of achievement.

I try to train at least four times a week, plus swimming and pilates help too.

Yes, I do to be honest! The club training offers a good base for all abilities.

What’s your current running aim for 2012?

10 miles to half marathon on the flat! It suits me, but I do like off road its more scenic.
Which race performance are you most proud of?

My first London Marathon. it was before I joined the club and I was a novice.

Which race would you you have to be forced to do at gunpoint? Great North Run, it’s a great event but just too crowded.

My first Brass Monkey half marathon race in 2010, It took me by surprise and a few club members too, I did really well and smashed my PB by 13 mins, all the hard training had paid off.

A sunny morning in early spring, preferably along a river or coastal route, peace and quiet.

Being injured, I’m not good in hot temperatures too!

Don’t give up! the club offers great opportunities for all abilities.

Club members support is probably the best at that!

Try doing a championship race, there are usually loads of Quakers there to support you on. Park runs are really friendly and great for a non competitive run too!

The one to the bar! No seriously – trail races are the most enjoyable.

Some nice food and a real ale!

The coaching staff and support.

What is your favourite training session?

← July 2011: Lucy Jefferies July 2012: Julie Whinn →
We use cookies on our website to give you the most relevant experience by remembering your preferences and repeat visits. By clicking “Accept All”, you consent to the use of ALL the cookies. However, you may visit "Cookie Settings" to provide a controlled consent.
Cookie SettingsAccept All
Manage consent