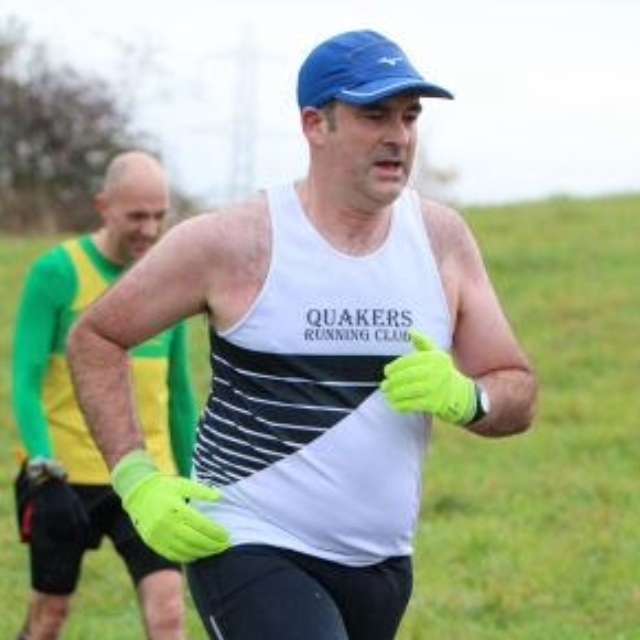 All Quakers headed off the roads at the weekend, with several racing in memory of a fellow local runner. Matt Jackson coming into the finish at a muddy Cowpen Bewley

Running in the dark were Emily Beaumont and Michelle Boshier, who completed the Chop Gate Night race. On a circular 9.6 mile route which started and finished at Chop Gate itself, and took in Carlton Bank along the way, they finished together in 2:59:36.

In South Wales, Dave Thompson and Annette Clarke took part in the Brecon Ultra, a 46 mile race held in the Brecon Beacons national park. On a route which took in fields, trails and even a canal towpath, they finished together in 11 hours 3 minutes.

The previous week had seen the latest of the Hardmoors trail race series, on this occasion at Goathland, which saw runners braving some chilly and snowy conditions. In the marathon event, Emily Beaumont and Michelle Boshier went round the course together, finishing in 7:43:15, while in the half marathon race, Michael Joyeux kept up his winning streak for the series, crossing the line first in 1:39:17.

The cold weather played havoc with the parkruns at the weekend; the icy conditions leading to several being cancelled, including the one at South Park. As a result, the only runner to actually finish a local run at the weekend was Stephen Moore who ran at Albert Park in 22:50. Flying the Quaker flag overseas was Carol Penney who had no such issues with the weather in South Africa, completing the run in Cape Town in 35:56.

← Press Report w/e 13/11/2016 Press Report w/e 27/11/2016 →
We use cookies on our website to give you the most relevant experience by remembering your preferences and repeat visits. By clicking “Accept All”, you consent to the use of ALL the cookies. However, you may visit "Cookie Settings" to provide a controlled consent.
Cookie SettingsAccept All
Manage consent