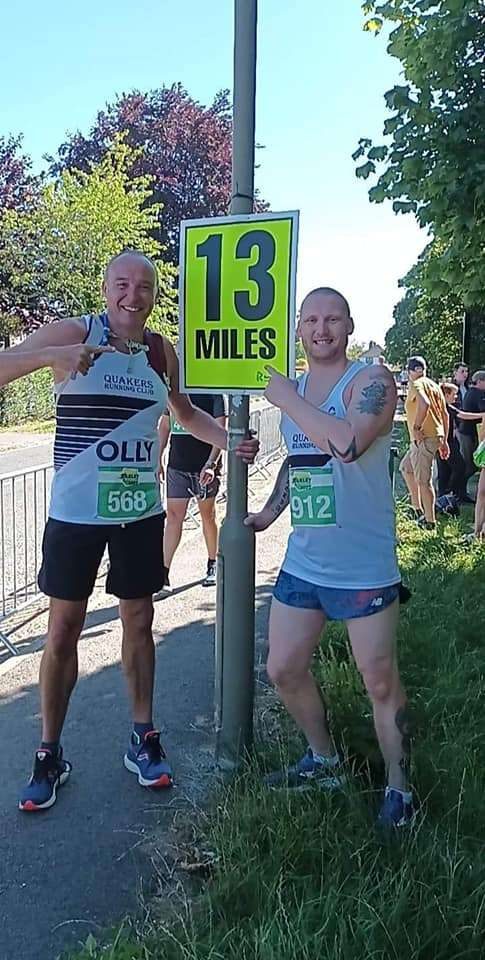 Another busy fortnight for Quakers…

There was plenty to celebrate down at Darlington parkrun as Ed Griffiths shaved 5 seconds off his previous time for a PB (19:34), Abbie Hull shaved 1 second off to finish in 22:24 and Lisa Bowerbank crossed the line in 24:32. Meanwhile, Rob Gillham completed his 250th parkrun, 244 of which have been at Darlington.

Over at Hartlepool, both Phil and Lesley Neal bagged themselves PBs in 20:02 and 26:02 respectively.

This event had various distances to choose from. Starting in the historic market town of Otley, it takes in the highest points around the town with runners enjoying uninterrupted views around Wharfedale with highlights including Literal Otley Chevin, Lindley Moor, Rombalds (Ilkley) Moor and Beamsley Beacon. Karen Dove chose the 20 mile option with just shy of 4,000 feet of elevation, completing it in 7:23.

This is a 24 hour race against the clock to see how many 8km laps can be completed before time runs out. Competitors can enter as a solo runner or as a part of a relay team. Quaker Solo runners included Billy Harris, Wendy Colling, Phil Rutter, Gill Colling and Mark Colling.

The Saunders Lakeland Mountain Marathon is a navigation race with a variety of courses in the West Lake District area. Teams of 2 can choose from 6 courses and they need to be competent in the use of map and compass in the mountains. The start location remains a secret until a month before the event.

The Festival of Sport at Tenby had an international buzz with National Age Group teams from England and Wales competing in 5k, 10k and a Half Marathon events. Up to eight athletes were selected in each distance and all three races were held on challenging courses!

England won overall. Well done all of you, we are very proud!

This year the Great North 10k route started in front of the Baltic and took runners on a journey along the River Tyne, past Newcastle and Gateshead Quayside’s iconic landmarks, before returning to the Baltic to cross the finish line. Ian Burgess completed the run in 49:35 with Daniel Orton close behind in 51:40.

Starting and finishing on the historic Quayside, this race is a fast, mainly flat out and back 5 mile course along the quayside, passing 7 of the river’s iconic bridges.

This 8 mile fell race heads East from Commondale before heading South towards Danby, skirting the fell and through Danby Park and running parallel to the railway track, back towards Commondale.

Abbey Hull was the only Quaker taking part, finishing in 1:14 and achieving 2nd FV40. (Provisional, results not yet published)

Dawn Richardson was 1st lady to finish in 19:38; Shaun Eland bagged a PB (23:37), shaving off another 18 seconds from his very recently achieved PB and Ian Hammond celebrated his 50th parkrun, all of which were ran at Darlington.

Meanwhile, over at Flatts Lane, Dave Jones was 1st finisher, completing the undulating 2 lap course which heads out along the old railway line before heading through the woods in the Woodland Country Park, in 20:51.

QRC’s very own race! The Lyke Wake Challenge starts from near Osmotherley (Sheepwash car park, top of Cod Beck reservoir) and finishes in Ravenscar village in the Raven Hall Hotel grounds. This year 68 out of 77 starters finished and we had 5 Quakers completing the challenge.

The Challenge is held on a handicap basis, based on previous run times over the Lyke Wake route and/or participant’s own estimates. Parts of the route are severe and remote with runners carrying mandatory kit. The route is not marked and must be completed in 12 hours, passing through all 7 checkpoints – this year, participants set off between 4am and 10am, experiencing very hot weather conditions.

Scott Beaumont was first Quaker home and 4th finisher in 8:37; Claire Chapman and Rebecca Bowes completed the challenge together in 10:18, whilst Stephen Ash and Mel Newton finished in 12:04 and 12:08 respectively.

The Ilkley Half Marathon is organised by Ilkley Round Table to raise funds for local good causes. The course is a fully road closed event in the beautiful Yorkshire countryside. It was another hot one with Daniel Orton finishing in 2:08 and Michael Oliver, completing number 8 of his 12 half marathons in 2:18.

This virtual event took place between 10th July midnight on Saturday to midnight on Sunday 11th July to raise money for Bowel Cancer UK with Karen Dove and Emily Beaumont completing a half hour relay slot each.

Pitstop provides a unique opportunity to run around the very popular Croft venue, finishing on the Pitstop straight on this historic race circuit. A flat and fast course that is ideal for runners chasing their PB.

The 5k and 10k races start simultaneously in the ancient market square and chase through the narrow cobbled streets and along the beautiful River Wear with the imposing 900 year old Cathedral always beckoning.

Diane Vaughan ran the 5k race at The Queen Elizabeth Olympic Park in London on a very hot 21st June, finishing the course in 22:03 and taking 3rd place in her age category.

← Press report - 15th - 29th June 2022 Lyke Wake Challenge - 9th July 2022 →
We use cookies on our website to give you the most relevant experience by remembering your preferences and repeat visits. By clicking “Accept All”, you consent to the use of ALL the cookies. However, you may visit "Cookie Settings" to provide a controlled consent.
Cookie SettingsAccept All
Manage consent