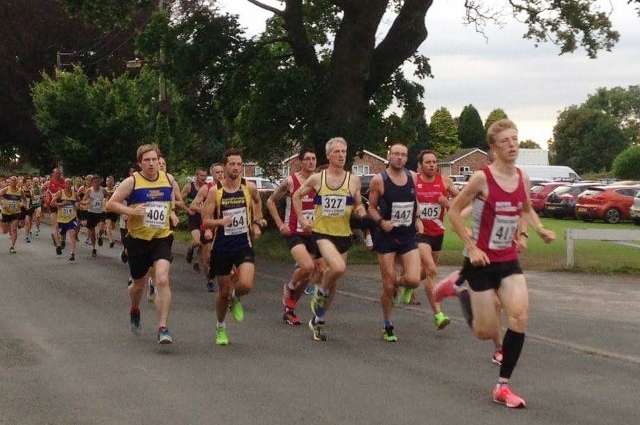 The prospect of a shorter, summer evening race on country lanes in Yorkshire will always appeal, however despite a desire to participate in the Sessay Swift, life has always thrown up other plans. Following the London Marathon in April, it’s been a struggle to regain any kind of speed, so this year this race provided the perfect challenge to push myself again, and I made a concerted effort to ensure I got there this year.

The race is hosted by Thirsk and Sowerby Harriers, and for the experienced runner the unconventional distance of 6K is short enough to not to require specific training, but provides an interesting question. Do you treat the race like a 5K, and try and hold your pace for the additional kilometre, or do you start at 10K pace and build your speed as you progress? Wanting to use the race to push myself, I had a definite approach in mind.

Arriving in the small village of Sessay, I was directed to park on the local cricket pitch, and numbers were to be collected from the village hall adjacent. Many had entered in advance, however there seemed to be plenty of numbers available for ‘on day’ entries, and whilst the registration process was busy, it was very well organised. Despite hosting, it was obviously that Thirsk and Sowerby Harriers liked to put out a strong contingent in the race itself, and there was also a very healthy representation from Ripon Runners and Knaresborough Striders.

I headed back to the car, pinned my number to my vest, and with twenty minutes or so to go until the start, I headed out for a little recce. Within minutes I’d bumped into Steve Middleton from the Richmond and Zetland Harriers, and after exchanging a few pleasantries, we headed out on a warm up together. Steve is a regular on the local race scene, so it was nice to catch up with a friendly face. Steve had also run the race previously, so it was a great opportunity to pick his brains about the course – one big loop, country lanes, predominantly flat, with a couple of slight undulations. Sounded perfect, and so we ran the first kilometre of the course before returning to the village just in time for the start. Paul Dalton (447) at the start of possibly the only 6K race in the country!

One of the features of small village races I enjoy is the quaint, ‘back to basics’ approach. As we lined up, and indulged in the usual cagey, pre-race start line banter (“How’s training going?” “Well, we’ll see won’t we…”), a lovely older lady at the side of the road produced a battered folding step stool, stepped up, welcomed runners, provided safety instructions (as the race was to be run on open roads), and informed us that we were to start on a blast from her “tinny whistle”. No chip timing here then… After a countdown from three, and a blast from said ‘tinny whistle’, we were on our way.

Now, back to that question on how to treat a 6K race. In this case my approach was to run fast. Simple as that really – run as fast as I could, for as long as I could! Initially, I found myself running with Steve (who has bested me on every occasion this year), and a runner from York Acorn (Paul Whitaker), in a group behind a front pack of four. I knew I was running quicker than I had for some time, and it felt good, however shortly after we conquered the first of the undulations, Steve and York Acorn started to pull away from me, and I felt my pace dropping. I ran on my own for a further kilometre or so, before I was caught by David Hack, from Richmond and Zetland Harriers, and another runner. Checking my Garmin, I was running at slightly faster than my goal 10K pace, so knew I was still running relatively well, and as we approached the second of the undulations I was determined not to yield any further places. I pushed up the hill, started to pull ahead again, and actually felt strong. Looking ahead, I could see Steve and York Acorn had caught and passed Gary Dunn from Thirsk and Sowerby Harriers. Gary is a very strong and competitive veteran runner, with a sub-35 10K time to his name this year, however he seemed to be dropping back from Steve quite quickly. In my rejuvenated state, I fleetingly wondered whether I could catch Gary too. Re-entering the village, the encouragement and support from the villagers, and friends and relatives of fellow runners, was fantastic, however unfortunately Gary remained elusive. I crossed the finishing line just outside the village hall in seventh place in a time of 20:58, five seconds behind him.

As I congratulated those who had finished ahead of me, Steve kindly reminded me that this was his sixth victory over me this year, however the banter is all part of the fun, and I wouldn’t have it any other way. It’s great to see your friends running well. Dripping in sweat, I knew that I had worked hard, and could start to enjoy the post-race recovery. No race memento, but a bottle of water, a banana and a choccy biccie was reward enough on the night – for an entry fee of just £8 you can’t expect too much. All in all, a very enjoyable race!

← July Achievements Funds raised for Mountain Rescue →
We use cookies on our website to give you the most relevant experience by remembering your preferences and repeat visits. By clicking “Accept All”, you consent to the use of ALL the cookies. However, you may visit "Cookie Settings" to provide a controlled consent.
Cookie SettingsAccept All
Manage consent