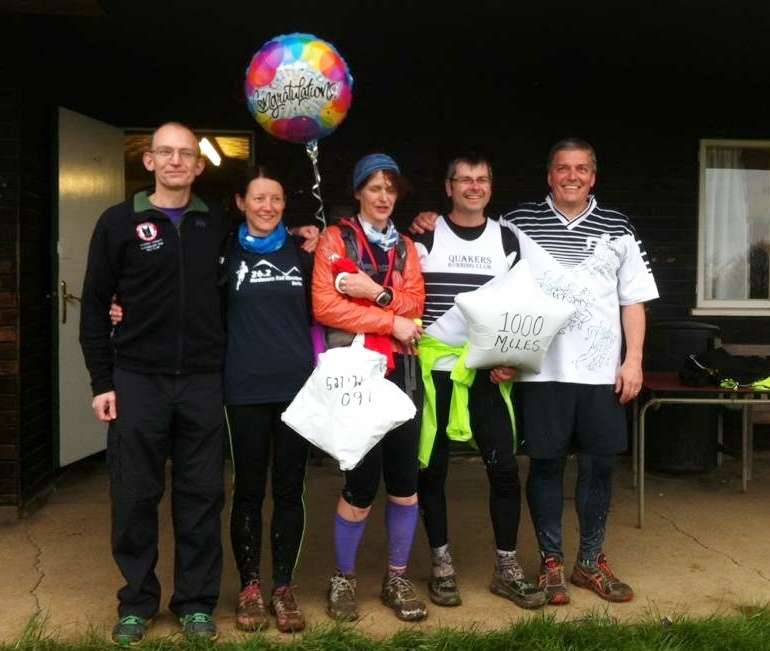 In possibly her toughest race yet, Wendy Colling went where no Quaker had been before at the weekend, completing the Hardmoors 160; famously dubbed “The Ring of Steele”.

The route covered 160 miles, taking in the entire length of the Cleveland Way, as well as linking up with the Tabular Hills Route, to skirt virtually the entirety of the North Yorkshire Moors itself. In all there was over 7,000 metres of ascent including Roseberry Topping and Captain Cook’s Monument. Wendy Colling (centre) alongside the relay team (and her support crew!) at the finish in Helmsley

A 50 hour time limit was in place for the race, which started on Friday teatime and, although there were a couple of close calls in making some of the cut-off times, Wendy finished fairly comfortably inside the time, crossing the line in Helmsley after an amazing 48 hours 7 minutes on her feet.

She was ably supported all the way round by the quartet of Anthony Corbett, April Corbett, Roy MacDougall and husband Mark, who entered the event as a relay team, and finished alongside her. In doing so Mark also joined the Hardmoors 1000 Miles club.

← Summary of March Achievements Quakers support Darlington Race for Life →
We use cookies on our website to give you the most relevant experience by remembering your preferences and repeat visits. By clicking “Accept All”, you consent to the use of ALL the cookies. However, you may visit "Cookie Settings" to provide a controlled consent.
Cookie SettingsAccept All
Manage consent