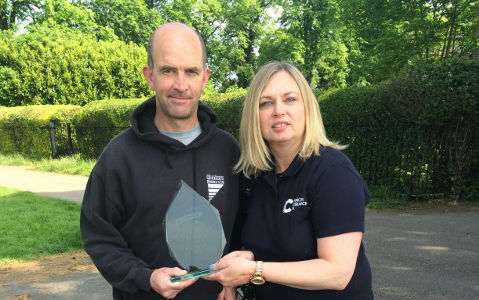 South Park was once again a sea of pink as thousands of runners turned out for this year’s Race for Life, supported as ever by members from the club.

The club provided all the marshals on the day, as well as the lead bike and tail runner, the former of who celebrated his birthday getting chased by over 1,700 women!

In recognition of the support Quakers members have provided over the years, race organiser Susan Johnstone from Cancer Research, presented the club with a special memento as a thank you to all those who have given their time over the years.

Some of our members also took part in the race itself, and appropriately enough, the first runner across the line was our very own Dawn Richardson.

← Wendy conquers Hardmoors greatest challenge April Achievements →
We use cookies on our website to give you the most relevant experience by remembering your preferences and repeat visits. By clicking “Accept All”, you consent to the use of ALL the cookies. However, you may visit "Cookie Settings" to provide a controlled consent.
Cookie SettingsAccept All
Manage consent