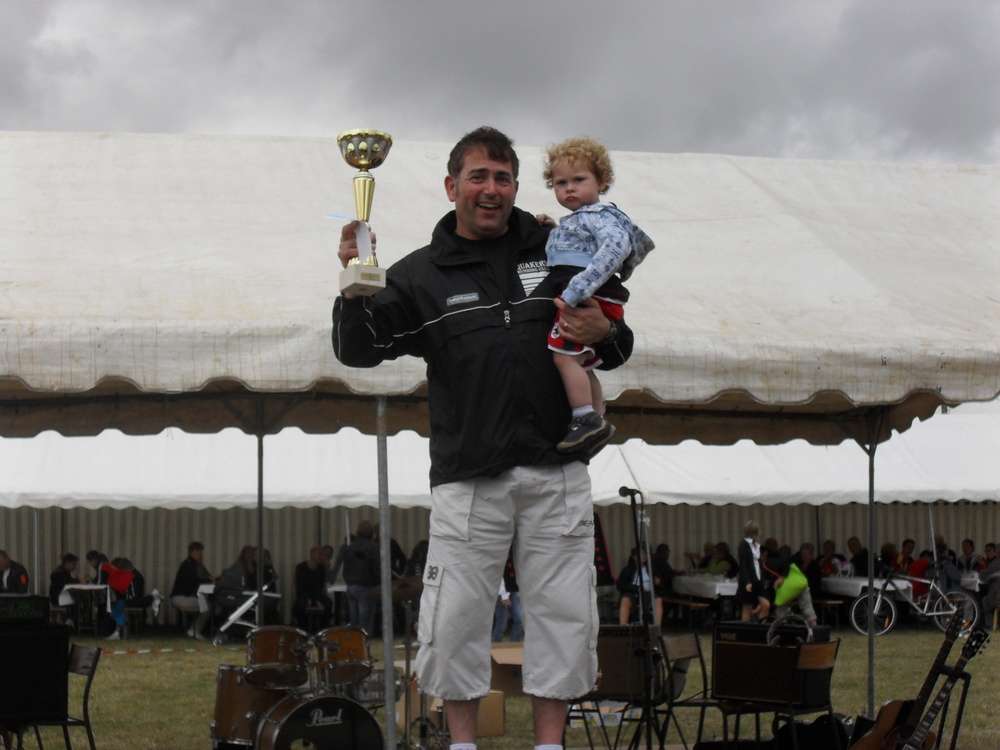 I played football till I was 34 (before the knees gave out) and I was challenged to run the GREAT NORTH RUN – that was 1995. I joined my local running club (Havering 90 Joggers) -they were a small friendly club, they offered me lots of advice and encouragement, I ran the London Marathon the following year and as they say, the rest is history.

Why do I run, it doesn’t matter how bad the day has been or how stressful life becomes, I just put on my running shoes and step out the door and after a few paces the worries roll away and life comes back into perspective.

I have always enjoyed running, but I think that encouragement of other runners when running became my main sport, especially the people I regarded as good runners and also I had a goal: the Great North Run.

How did you end up at the Quakers?

When I moved to Darlington in 1997, I went to the information centre in the town square and was told there was only one club in Darlington – the Harriers. So I went up to Longfield school and joined the harriers. Approximately 3 weeks after joining I went for a run with the fast group they left me somewhere in Denes. I didn’t have clue where I was, and I had to phone home for directions.

I then did the Darlington 10k (old course) and had a good battle with bald headed chap in a black & white vest who out sprinted me at the finish. We shook hands afterwards and he informed me he didn’t like getting beaten by a Harrrier. I really didn’t understand what he meant, so I asked him who he ran for, thinking it would be Durham or Aycliffe; he told me the Quakers (Darlington). It was Keith Shevels (one of the founding fathers.) I was unable to find the Cleveland Bridge Sports Ground, so I didn’t join the club until they moved to Hummersknott School.

I normally do 3-4 sessions a week (2 club), unless I am training for a marathon, when I would try to do 5-6 plus a cross training (swimming / bike) session, but this year I have not been very focused, so my training has been erratic.

Generally I would say yes I do, the club nights gives you the chance to do sessions you are not likely to do on your own, and you always have the choice of pushing yourself or just chatting.

I really do like just to go out early in the morning for a run on my own, I love the peace and quiet before the motorist get up (the loneliness of the long distance runner).

What’s your current running aim at the moment, any big races in mind?

I don’t have aims for the rest of this year, But 2011 is big year me (the big 50). I hope tor un two marathons; either London or Edinburgh in the spring, and New York in November. I also want to do the Lyke Wake walk, I have never gone past the marathon distance.

I would have to say London Marathon 2006; finally getting under 4 hours. I had a plan which I stuck to and finished only 2 min 27 seconds behind schedule.

What would be your biggest running achievement?

I seriously injured my Achilles tendon in December 2001, and I was told by a Doctor that I would never run again and I would walk with a permanent limp (nothing like a good bedside manner!) I had to have major surgery and spent 6 months in plaster. So this run is very special to me.

What is your favorite race / distance / terrain?

It would have to be the Kilburn Feast 7, I love undulating courses,

Half Marathon is my favorite distance – I believe anyone with a reasonable level of fitness can run a 10k, but you have to want to train to achieve a half Marathon

A crisp autumn morning, no one about and just me and Robert in his buggy charging along the open road.

I would have said nothing, but after this year Great North Run, definitely mass participation events where they don’t check the runners declared times.

Don’t worry about the distance you run, concentrate on time on your feet and never be afraid to walk for a short while.

How did you come up with the idea of the 10k Leagues?

I borrowed it from my old club; it was their equivalent of our club championship. A point was raised at the club AGM to try to encourage and keep newer members at the club. My original idea was 5k leagues but unfortunately at the time there really wasn’t enough 5k races, so used 10k instead. I wanted something that would work with the Club Championship and also something that everyone had a chance of winning.

How does it feel knowing that people are going out of their way to try and race at lots of different 10k races because of you?

I have always believed that you have to support local races (no matter how boring the course) or we will lose them – the leagues gives us that opportunity, and I was very proud when 10 members got prizes last year, over a wide spectrum of abilities

You’re often found pushing Robert around races and training in a push chair, why did you start doing that and has it helped your training?

When Caroline was pregnant, I got the idea to get a proper running buggy as I thought it would be fun.  When Robert was born on the eve of the 2008 London Marathon it seemed like an omen; I sat with Robert in my arms watching the Marathon on telly the following morning and informed poor Caroline that I was going buy a running buggy. I bought it off eBay for £20, I then got into the 2009 London Marathon and started training regularly with Robert.

As for training benefits I would say they are more cardio vascular than physical, though it is all leg work and little arms.

I started racing with Robert, because it was fun! Robert likes waving at everybody and it meant Caroline has been able to run races, we don’t need a babysitter.  On a personal level it does create banter with other runners and in the end that’s what’s running should about – having fun doing something we all enjoy doing.

We have Robert so relaxation is at a premium, but I must say stopping at the pub for Sunday lunch is always a pleasant reward after a race

Without a doubt it’s the Members, you don’t know half their names, but race anywhere and you will meet a friend in a Quaker vest.

Finally, what’s on your iPod as your favorite running power song?

July 2009: Julie Jefferies →
We use cookies on our website to give you the most relevant experience by remembering your preferences and repeat visits. By clicking “Accept All”, you consent to the use of ALL the cookies. However, you may visit "Cookie Settings" to provide a controlled consent.
Cookie SettingsAccept All
Manage consent