A Quaker heads to Buckingham Palace! 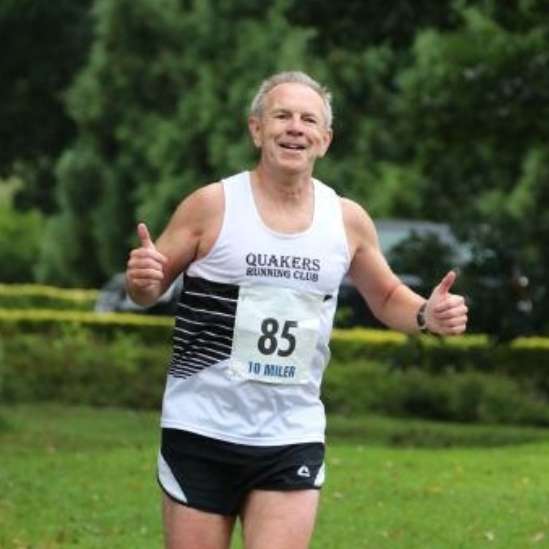 It was a good start to 2017 for one Quaker who was the proud recipient of an OBE in the New Year’s Honours List. Peter in one of his many races in the Quaker colours

Peter Rowley, who has been a member of the club for over ten years, received the honour for services to sports administration, though you may not know just how involved he has been with sport over the years and continues to be!

He was a board member of Sport England for seven years until late last year and before that, the Chairman of Sport England North East, the Regional Champion for Community Sport (all three posts of which were Ministerial appointments) as well as an independent member of UK Sport’s Audit Committee.

Presently, Peter is still very active within the sporting world, and is involved in a wide variety of projects, both locally and nationally, which include:

Peter had this to say about the news; “I am astonished, but very proud to be thought worthy to be recommended to Her Majesty the Queen to receive the OBE. “I believe passionately in the power of sport to change people’s lives and the communities they live in. It has been a privilege to be a volunteer in community, regional, national and international sport, where I’ve been fortunate to meet and work with many inspirational people, all of whom are committed to helping people fulfil their potential. This award is about them, not me and to recognised for volunteering in sport after such a wonderful year for British sport is all the more special.”

He will be invited to Buckingham Palace to receive his OBE at one of several investitures taking place during the first half of this year.

Congratulations Peter, on behalf of everyone at Quakers Running Club.

← Clubmark Launch January 2017 Club Achievements →
We use cookies on our website to give you the most relevant experience by remembering your preferences and repeat visits. By clicking “Accept All”, you consent to the use of ALL the cookies. However, you may visit "Cookie Settings" to provide a controlled consent.
Cookie SettingsAccept All
Manage consent