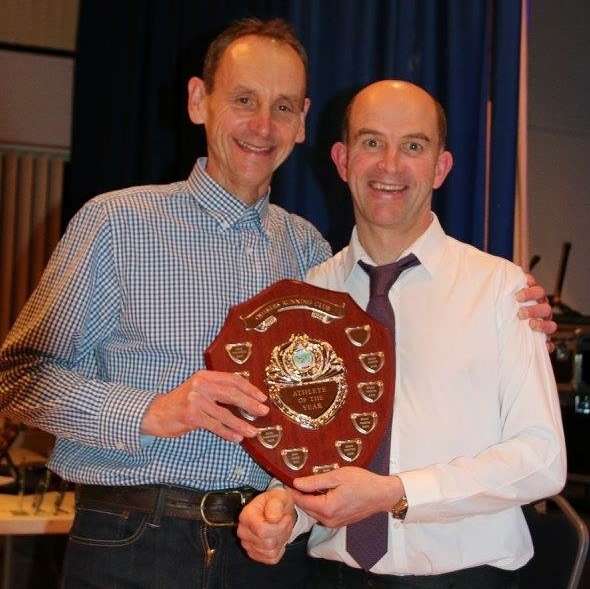 For once Quakers weren’t to be found in their running gear as this year’s presentation night rolled around. The Athlete of the Year Award went, for the second year running, to Brian Martin, most notably in recognition of qualifying to represent England at Masters level. The Senior Male and Female awards for the year went to Alex Kiel and Rebecca Howard, while Marc Ellis and Dawn Richardson took home the Veteran Male and Female awards. The Most Improved Awards, to recognise those who had made the biggest strides during the past year went to Diane Adkins and Billy Harris, while Ian Readman was the recipient of the new “The one who slipped through the net” award.

In the other race related awards, Lewis Boshier won the Parkrun Challenge, with Gill Wallis walking away with last year’s Summer Trail Race Handicap title. In the year-long 5K Handicap Series, Lewis Boshier won a close battle with Billy Harris and Lindsey Lester who placed second and third. The Cross Country awards, for those who had taken part in the discipline over the winter months, went to Louise Trainor and David Ledgerwood.

The Special Merit Awards, to recognise those runners with some particularly noteworthy achievements went to Richard Hughes (for completing his epic six-day, 155 mile Fire & Ice Challenge in Iceland), Wendy Colling         (for completing the Hardmoors 160 mile race in just over 48 hours), Annette Clarke (for being the first ever female finisher in the 92 mile West Highland Way Challenge) and Michael Joyeux (for his clean sweep of winning all seven Hardmoors trail half marathons).

The Catastrophe Award, for the biggest slip-up during the year, went to Michael Joyeux, for going the wrong way while leading a race, taking all the front-runners along too (though a certain runner from New Marske Harriers should possibly share this award with him!)

Four runners headed further afield at the weekend in search of half marathons. At the Haweswater half marathon, held on an out-and-back route along the lake itself, Alex Kiel finished in fourth place overall in 1:15:05, with Robert Kirby coming home in 1:58:41.

Also running the 13.1 mile distance was Paul Dalton, who completed the windy race held on the Welsh island of Anglesey in 1:20:39

Meanwhile, in Worcestershire, Lyn Hatch completed the half marathon down in Droitwich in 2:01:31.

← Press Report w/e 26/02/2017 Press Report w/e 12/03/2017 →
We use cookies on our website to give you the most relevant experience by remembering your preferences and repeat visits. By clicking “Accept All”, you consent to the use of ALL the cookies. However, you may visit "Cookie Settings" to provide a controlled consent.
Cookie SettingsAccept All
Manage consent