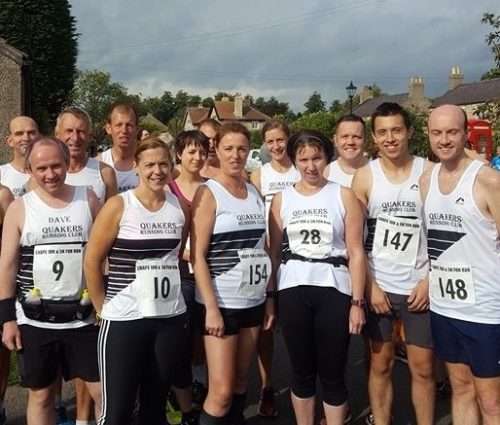 Although I’ve been running for several years now, there are still races I’ve not had chance to run yet, and the 10K at Snape last weekend was one of these. The race starts and finishes in the village itself, which is just a few miles south of Bedale. There is something very enjoyable about these types of races; they are usually fairly cheap to enter and proceeds from the race usually go to help with the upkeep of a village amenity such as the school or village hall. The fact it is held on a Saturday also adds to the charm, given that 95% of the time, we are all used to running on a Sunday. As well as the main race, there was also a 5K race on offer too, which most of the local schoolchildren seemed to be taking part in.

The race itself was described as multi-terrain and it certainly lived up to its description. On the plus side, the route was fairly flat, with barely an incline in sight. The first mile was on a country road as we headed north out of the village, before turning left into a field. Thankfully it hadn’t rained much so the surface was fairly dry, otherwise it could well have passed off as a cross country race! As we were about to leave the field, the 5K runners started approaching us from the other direction. Luckily I’d already spoken to someone who had done the race last year, who described the two race routes, otherwise I would have thought it was the frontrunners of the main race coming back as they’d gone the wrong way! From there we headed out onto a quiet country lane, before bearing onto the main road which took us into the southern outskirts of Bedale, where the halfway point was.

Heading briefly into the village, the second half of the race went through the grounds of the local school, where the water station was located, before turning back onto another country lane to head south and back to Snape. At this point the wind decided to pick up, which made the inbound leg that bit tougher. By now, there was just myself and another runner on our own, so we took turns to shelter each other from the wind so we didn’t tire ourselves out too much from trying to fight it! With about two miles to go, we then ran through a nice wooded section of a private estate, before having to cross one more field, with a few sheep there for company. The final mile was then all on trail path, heading back into Snape to finish at the exact same place in the village where the race had started.

The best was yet to come though, as the organisers had also put on a spread in the village hall with several sandwiches and more cakes than you’d find in the Bake Off tent! Overall I found it a thoroughly enjoyable race and will definitely go back again next year. There was great support all the way from both the villagers and the marshals en route, and personally I couldn’t fault the organisation. There were only about 100 entrants in the race so it is very small by comparison to others. It was the 28th running of the event so it is great to see a race like this still being supported by local runners. This was definitely one of those days which reminded me why I enjoy running so much!

← August Achievements September Achievements →
We use cookies on our website to give you the most relevant experience by remembering your preferences and repeat visits. By clicking “Accept All”, you consent to the use of ALL the cookies. However, you may visit "Cookie Settings" to provide a controlled consent.
Cookie SettingsAccept All
Manage consent