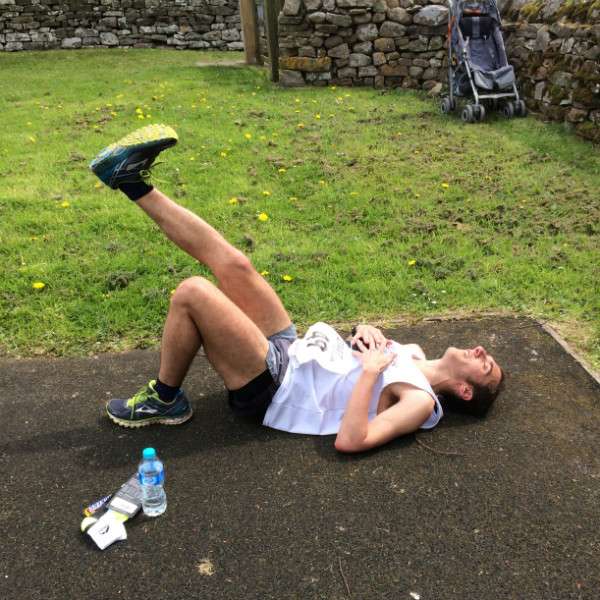 Amongst many other things in the world, I must admit that I am occasionally partial to a little bit of off-road running. Sure, there’s something really quite appealing about a flat and fast road 10k: the even splits, the terrain being completely what you’d expect and the knowledge that in the preceding days, you’ll be able to walk down a flight of stairs without wincing. However, when off-roading, you can be safe in the knowledge that mostly none of the aforementioned things will happen!

So, last Sunday, off I went to the Reeth 20km run for the latest Club Championship race. Before the race, I had looked at the entry list and quite fancied a good finish. So much so, that I had researched the terrain and elevation and I saw that – give or take – the race pretty much went uphill for around 8 miles and then went downhill for 4 miles; it was all on hard pressed trails with lots of loose rocks and pebbles; and that I’d be damned if I wore road shoes and damned if I wore trails.

Road shoes offer more cushioning and support when running on hard and compact surfaces and they’ll help absorb the impact of running downhill but they are useless when it comes to gripping loose gravel underfoot. Trails (or the lightweight Innov8 fell shoes I wear) are light, ideal for racing and gripping on soft surfaces but offer no protection to the hammering of the ground when running quickly. In the past, when I’ve raced in my Innov8 shoes on dry days, my feet feel bruised and tender afterwards so I made the decision to go with the road shoes.

Reeth 20km registration was in an ice cream parlour in the small, dales village of Reeth. With only a hundred or so entrants, there was ample parking around the village and I was able to get parked easily and jog to pick up my number. There were already some Quakers, April and Anthony, enjoying a pre-race coffee and there was a really happy feel about the race. I chatted to some of the other runners before going to help Emma with the military operation of getting a new-born and a toddler to the start line.

The race started about 1km away from the registration point: down a lane, down a hill and across a river. Once we were all assembled, the race director explained that because of the recent farm developments, the finish would now be over a bridge, up a hill and along a lane. A little extra distance and elevation – what a treat!

The race set off and we were directed along a river path. It was completely dry underfoot and the decision to go with the road shoes was completely justified. I was racing with a young runner from Sedgefield Harriers for the lead and I pushed myself to the front so I could slow him down and try to dictate the pace, guessing that he might try and open up some distance between us while it was flat and straight.

After a quick first mile of 5:20, the route went off road and we began climbing on some compacted gravel paths. I lost the lead as he charged and attacked the hills vigorously, quickly establishing a lead of around 100m. From previous races, I thought that he might tire and I felt confident that I would be able to catch up later on in the race, especially on the downhill section. The climbing continued on relentlessly and the young man seemed to be getting quicker and was extending his lead constantly. After a decent few miles of climbing, there was a brief downhill section so I tried my best to put a burst of pace in to catch him – and I did! Well, I reduced the lead down to around 20m.

Then… came more uphill climbing! It was now becoming a slog at around the 10k point – halfway! Looking up at the blue and white Sedgefield vest, I saw him stop and walk momentarily and I thought, “he’s tiring!” The hope was short lived as he started running again and disappeared over the summit. Once we got to the highest point of the run, I knew, relatively speaking, that it was all downhill. I was refreshed and had saved enough of my legs to really open up and stride down some fantastic trails. The views of the hills, rivers and scenery was spectacular and it was a delight going full pelt, twisting and turning between rocks and jumping over stones. If there was a single excuse to do this race, it was this section!

Within a couple of miles, the gap had closed to nothing and I took the lead with around 4-5km to go. Knowing that I would need to get some distance, I kept the pace hard and tried to keep pushing on as hard as I could. I settled into a good 5:40 steady pace and tried to visualise the finish line, the cake in the café afterwards and not being over taken.

After a few minutes of holding the lead, I afforded myself a look back and saw that I had a really good stretch between me and second place; not enough however to ease off. We came to a field and there was a marker indicating to cut across the grass, while there was a trail going off in the opposite direction. I decided to cut across the grass and through the gap in the wall. I went through and there was Gillian waving her cow bell! I was almost home! She yelled, “he’s gaining on you!”

Great! In an odd-way it was: just what I wanted to hear! And I mean that both sarcastically and seriously!

I picked up the pace and estimated that I had around 800m to go. I went over the bridge on route to the finish and tried to pick up the speed again to hold him off. Another Sedgefield Harrier spurred him on and told him to catch me! With a decent climb and a sport sprint to go, I wasn’t sure if I was going to hold on! I was tired, my mouth was drier than a spoken-word dictionary being read by Robert Loggia and my feet were shot! I pushed hard up the hill as hard as I could – grunts alerting some finishers of the 10k to let me through – and went into full on sprint mode!

With about ten metres of the hill left and fifty metres of flat sprint, I was over taken and he pushed on harder than I could manage. I tried and implored my legs to move but it was to no avail. He accelerated away and I crossed the line four seconds behind him.

Second place in 1:23 for a very hilly 20k race. It was an absolute cracker of a race and, while I was disappointed not to win, I knew that I had given it everything and that my best on the race was good enough for second place. I’d much rather have ran like that than had either an easy win or finished second miles behind first place. It was, as I like to say, a proper wig-splitting smackdown! The prize for second was a Start Fitness voucher and a bottle of locally brewed beer – bonus! The general race momento was a pair of socks, chocolate and water, with an ample supply of Jelly Babies to help yourself too!

Overall, Reeth 20k was an excellent race which was well marshaled, well organised and on a great course. I would massively recommend it! The views were spectacular and it was a lovely drive over to Reeth. There was also an option to just do 10k too. Get it entered next year!

← Race Report - Millenium Way Race Report - Staveley Lakeland Trail - Sat 6 May 2017 →
We use cookies on our website to give you the most relevant experience by remembering your preferences and repeat visits. By clicking “Accept All”, you consent to the use of ALL the cookies. However, you may visit "Cookie Settings" to provide a controlled consent.
Cookie SettingsAccept All
Manage consent