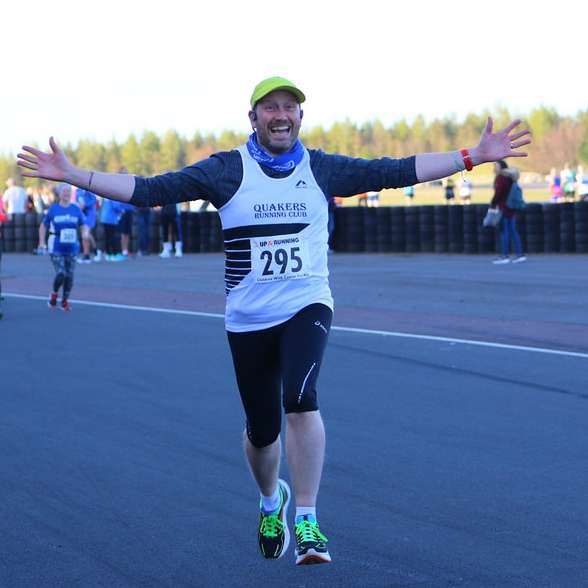 The past two weeks had seen Quakers scattered about at various places across the region. 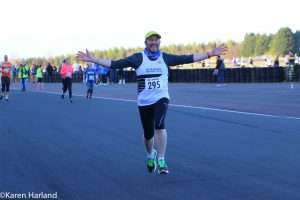 The race at Pitstop has barely begun but Lee Morris is clearly having fun!

Also taking place during the week was the first race in the Tees Trail Summer 5K series, held over at the Flatts Lane Country Park. Gemma Eddy finished the undulating route in 29:39 along with Nigel Eddy (30:54), Matt Jackson (33:39) and Tracey Plaskitt (37:05).

There were plenty of races the previous weekend, most notably the Hardmoors 30 mile event, on a loop from Whitby, including Robin Hoods Bay, Ravenscar, and Cloughton. Wendy Colling completed the route in 6:52:06 with Rebecca Dodd in 7:35:00.

Also out on the hills was Dave Thompson for the Derwentwater Dawdle, a circular from Braithwaite around the lake itself. On a route taking in 4,500 feet of climb, he finished the distance in 6 hours 34 minutes.

Down at York, three took part in the Big Flat Runway 10K, taking place around the airfield at Elvington. Tracey Plaskitt completed the multi-lap route in 1:05:20 along with Alison Hardwick in 1:08:45 and Viv Hardwick in 1:08:46.

Michael Joyeux headed over to the Middlesbrough Sports Village for the Endeavour 10K, completing the circuit comprising ten 1K laps in 33:51.

Two went up to the Shildon Open taking place on the track there, with both taking part in the mile event; Dave Jones clocking 5:23 along with Mike Kipling in 5:49.

Just the three runners were out last week. Midweek had seen Fred Tennant run in the Cockfield Chase, a 3.5K trail route near Cockfield itself, completing the route in 18:39 and first in his age category.

Two headed to Wetherby for the Bramham Park trail runs, where Chris Evans finished the half marathon route in 1:59:20, while Kathryn Plant completed the 10K distance in 59:45.

← Press Report w/e 18/04/2021 Press Report w/e 16/05/2021 →
We use cookies on our website to give you the most relevant experience by remembering your preferences and repeat visits. By clicking “Accept All”, you consent to the use of ALL the cookies. However, you may visit "Cookie Settings" to provide a controlled consent.
Cookie SettingsAccept All
Manage consent