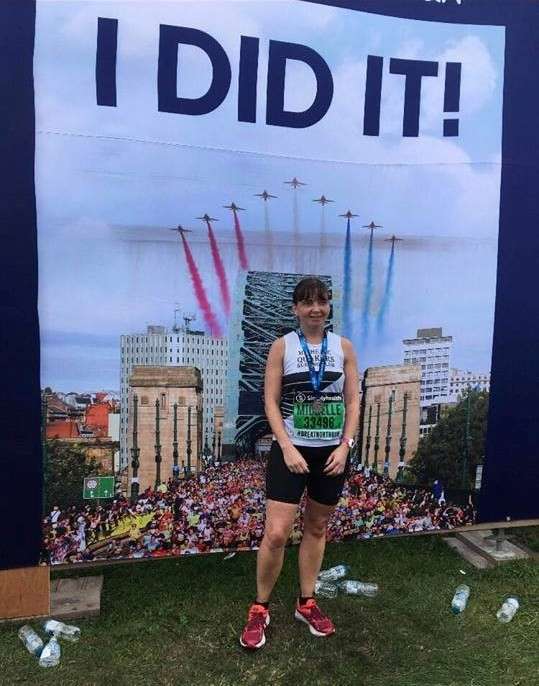 From not being able to run down her street, to finishing a half marathon non-stop, Michelle charts her progress and tells us why running in Darlington can be hell! 1. HOW DID YOU GET INTO RUNNING?
I used to do Body combat and Body attack at the dolphin centre but the classes didn’t always fit around work. Then on Christmas Day in 2013, I had a crazy idea that I would try running (I blame the alcohol!) Around the time, status’s about parkrun kept popping up on my Facebook newsfeed from a few mates, and I thought well at least it’s free and I do it whenever I liked so no more excuses of no exercising. I did my first run the next day, and even though I couldn’t even get half way up my street without stopping, that didn’t put me off as I tried my first parkrun just under 3 weeks later. I’ve now done over 160!

2. WHAT KEPT YOU GOING WHEN YOU FIRST STARTED?
I’d become overweight and the biggest I’d ever been after been a more healthy size during my teens and twenties. Once I started getting caught on camera at parkrun every week I realised even more than ever how much I hated the way I looked. So that was it, something had to be done, so I got stuck in and I was lucky that the weight fell off really quickly and easily for me and I’d gone from size 14 to a size 8 in less than a year. Happy days!

3. HOW MUCH TRAINING DO YOU TYPICALLY DO EACH WEEK?
On average, I run 4 days a week with an aim of covering 20-25 miles.

4. BE HONEST, DO YOU ENJOY TRAINING?
Well I’m sure that those of you who have run with me will be quick to say ‘she moans a lot!’ and yes I admit that is kinda true, but I do genuinely like it, I’ve stuck with it haven’t I? Though when the going gets tough, you’ll certainly know about it!

5. DO YOU MANAGE TO FIT IN ANY OTHER HOBBIES
Not really but as I don’t drive I walk everywhere, including to and from work which alone racks up
20 miles per week, so including my running and life in general I can easily rack up 70+ miles a week on my feet. A pretty active week on my feet means I do like to put my feet up when I can and have a good long lie in on a Sunday if it isn’t a race day.

6. TELL US ABOUT RACES YOU HAVE DONE IN THE PAST? I’ve done lots of races between 5k and half marathon distance. I really like the finish to the Ali Brownlee (Middlesbrough) 5k as you come into the stadium to the crowds cheering you in and chariots of fire playing at the finish. Brass monkey half marathon and Great North Run are other races that I don’t like to miss.

7. WHAT IS YOUR CURRENT RUNNING GOAL?
To master the art of the 10k, because it really is my bogey distance and I’m just totally rubbish at it. I can run 5k consistently in the 27’s and even have a sub 26 personal best, although I rarely do 10k in under an hour, do I Rob Dent!!! I always seem to lose the plot at roughly 5 miles. Time to get it right hopefully this year!

8. WHAT ARE YOUR LONGER TERM RUNNING GOALS?
If I ever do figure out how to do 10k properly I’d like to think I’ve got sub 55 in me. I’d also love a sub 2 hour half marathon.

9. WHAT IS YOUR FAVOURITE RACE/DISTANCE/TERRAIN?
Concrete all the way! I don’t like challenging courses with lumps and bumps so you’ll always find me at the nice and flat Redcar races. But also as already mentioned, Boro 5k, Great North Run and Brass Monkey are favourites too.

10. WHAT IS YOUR PROUDEST RUNNING ACHIEVEMENT?
When after a few attempts, I finally managed a non-stop half marathon (Brass monkey 2016).
I often run out of steam around the 10-12 mile mark (even now) but I finally got it right that day

11. HOW MANY PAIRS OF RUNNING SHOES DO YOU HAVE?
I generally just stick to one pair at a time. Can’t really afford the luxury of a few pairs.

12. WHATS YOUR IDEA OF RUNNING HEAVEN?
Probably the opposite to everyone else. The flat concrete courses, as I seem to be at my best (and less moany) then! Cool cloudy days too.

13. WHATS YOUR IDEA OF RUNNING HELL?
Where do I start? Off road, mud, puddles, anything that includes hills which to me generally includes most of Darlo! Hot sunny days, rain-( I rarely run in the rain unless I’ve paid for it!). You could say I’m a bit of a seasonal runner. I much prefer winter running over summer.

14. WHATS THE BEST PIECE OF RUNNING ADVICE YOU’VE EVER BEEN GIVEN?
To join the Quakers! Even though I took up park running pretty quickly, it was over a year before I joined you guys. A few of you kept trying to get me to join but I was stubborn and kept insisting that I was fine and could manage on my own. But eventually I figured that yeah, I could do with a bit of help. Best idea ever because I’ve met some great (and totally crazy) mates- oh, and my running has progressed too.

15. ANY ADVICE TO NEWCOMERS?
Been part of a running group is great, lots of varied seasons and friends to be made, and it’s good to have company for your runs on the dark winter nights than been out and about on your own. Parkrun too. We are very lucky to have so many free weekly events so nearby. 16. WHAT KEEPS YOU GOING WHEN THE GOING GETS TOUGH IN A RACE?
If we are going to the pub straight after, don’t wanna be late!

17.IF YOU COULD RUN ANYWHERE IN THE WORLD, WHERE WOULD IT BE?
I’m not fussy. I haven’t actually been abroad anywhere since I took up running. But next time I do get to go abroad, I hope there’s a parkrun nearby!

← Member Spotlight, February 2019 - Dawn Richardson Member Spotlight, April 2019 - Ian Young →
We use cookies on our website to give you the most relevant experience by remembering your preferences and repeat visits. By clicking “Accept All”, you consent to the use of ALL the cookies. However, you may visit "Cookie Settings" to provide a controlled consent.
Cookie SettingsAccept All
Manage consent