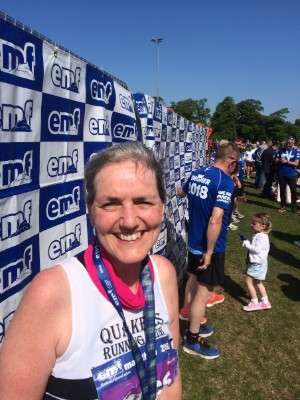 If there were medals for the cheeriest marshal, Grainne would be favourite for the gold, but her enthusiasm also spills over into her own running.

1.How did you get into running and why?
I first went out running when I was doing my A Levels. Was it running? Probably not, but it was moving faster than a walk. It was going along the narrow country roads where I was brought up near Belfast. That lasted until the exams were over. Another burst came when I was doing my degree finals in Liverpool. I just needed to clear my head! I entered the Ladies Liverpool 10K and had something other than exams to focus on.

2. What kept you going when you first started running?
Bloody-mindedness!

3. How much training do you typically do each week?
Is there ever a typical week? I used to run just once a week, but when I started training for the Edinburgh marathon a few years ago, I realised I needed to make a little more effort. I’m not running that distance again, so now I usually run 3-4 times a week. Saturdays are usually my long run. Anyone for a run?

4. Be honest, do you enjoy training?
There are days when I can’t wait to get out. These are usually long run days when it’s me and my dog out over the fields and by the river. Isn’t Darlington a great place to live? We have so many great routes to explore!

5. Do you do any other sports or fitness activities?
I go to a weekly Pilates class. This has been a really good way to build up the strength in my back – it often gives me gyp.
Last summer I went out with another Quaker lady to Ellerton Lake. Following this four of us decided to enter a SwimRun event – open water swimming and a bit of running thrown in. The training for this (until we get back out into the open water) is a weekly session in the pool. My stroke and confidence in the water has soared!

6. Do you manage to fit in any other hobbies?
It’s only in the last few years that I’ve explored other hobbies. Now, apart from baking, I make candles. I love candles! (Less fattening than cakes.)

7. Tell us about some of the races that you’ve done in the past
I’ve taken part in all sorts of races from 5k to a (2 day) mountain marathon. The most interesting have been in the fells. That’s where I’ve had my most spectacular falls, got lost, ended up miles from the designated route… all before the mobile phone era! 9. What are your longer term running goals?
I want to keep running until I can’t run any more. I want my children to understand the importance of, not just keeping fit, but being determined to achieve and succeed, irrespective of how big or small each goal is.

10. What is your favourite race/distance/terrain?
I think I like running 10 – 14 miles off road. Not too far, but far enough to have had a good run out.

11. What are your proudest running achievements?
Running the Edinburgh Marathon in 2018. I beat the previous year’s time by nearly 40 minutes!!! A pb to be proud of.

12. Anything in your running experience you regret?
Why have regrets?

13. How many pairs of trainers/ running shoes do you have and do you have a favourite pair?
I have 2 pairs of running shoes. When I was training for the marathon I had 3 pairs and rotated them with each run. They’ll all be fit for the garden soon…

14. What’s your idea of running heaven?
Probably running along sea cliffs with no one else around. Just me and the dog. 16. What is the best piece of running advice you’ve ever been given?
If you’re out for a run and it is hell, go home – unless it’s your longer run.

17. Any advice to newcomers to running?
Run alongside others. Chat and listen. Pick a pace that suits you, but inch it up a bit to push your pace over time. Always remember that we should run because we want to, so enjoy it!

18. What keeps you going when the going gets tough in a hard race?
The thought of the end. There is always one – somewhere.

19. How do you relax/reward yourself after a race?
I don’t.

20. If you could run anywhere in the world, where would it be?
Greenland.

← Member Spotlight, May 2019 - Dave Jones Member Spotlight, July 2019 - Emily Beaumont →
We use cookies on our website to give you the most relevant experience by remembering your preferences and repeat visits. By clicking “Accept All”, you consent to the use of ALL the cookies. However, you may visit "Cookie Settings" to provide a controlled consent.
Cookie SettingsAccept All
Manage consent