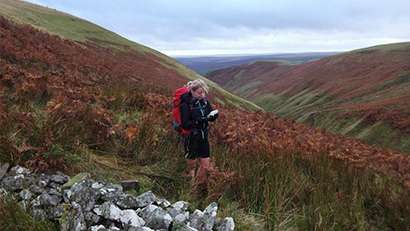 Long time member and coach Abbie Hull gives us insight into the world of off road running and tells us about how she got started in the sport. I first began running regularly in my final year at uni in Sheffield.  I started out running the odd mile on the treadmill in the gym, but soon headed out into the local parks, walking and running until I’d built up to 5k.  I ran the Sheffield and Darlington Races for Life in 2004 and continued from there, completing my first 10k (as a Darlington Harrier!) at Raby Castle the following year.

I was interested in improving my fitness and enjoyed the simplicity of sticking on a pair of trainers and heading out for a run; being outdoors was far more appealing to me than being stuck in the gym.  Being able to run for longer periods of time and seeing my pace increase as I got fitter encouraged me to keep pushing to see what I could achieve.

I started by working my way round many of the local 5k and 10k road races, as well as trying out a few trail races.  I completed my first Swaledale Marathon in 2008, and this year completed my tenth. I began to move away from road racing and more into off-road, such as LDWA (Long Distance Walkers’ Association) events and fell racing on the North Yorkshire Moors.  I’ve taken part in 24 hour team events and have completed a few ultras, ranging from 30 to 50+ miles in length. In the last few years I have taken part in several mountain marathons (two day orienteering events where competitors must be entirely self-sufficient – carrying all their own camping equipment, food/water etc – and navigate their way around a large event area) completing events in the Lake District, the Cheviots, Snowdonia and the Southern Uplands in Scotland.

Far less than I should!  For the past few years I have done very little consistent training unfortunately – and it shows!!  However, in the past I would generally run four or five times a week, incorporating the two main club sessions and a long run or an event at the weekend.  I am now going back to basics and intend to include at least one or two specific strength / core training sessions each week alongside a couple of runs. I don’t always enjoy the thought of training, but once I get myself out then it’s rare that I don’t enjoy it – at club I like to push myself in the different sessions, and at home it’s great to get out into the countryside and enjoy the scenery while getting a few miles under the belt at the same time.

I haven’t got anything specific booked in for the rest of the year, so the main aim is to work on improving my strength and fitness while staying injury-free – and to regain my love and enjoyment of running!  Off-road running is definitely my preference, so I would like to get back into regularly competing in our local fell races, although I do feel I have unfinished business on the roads, so I would like to train up for at least one more season at some point in the future to see what times I’m capable of eking out…

My favourite terrain is definitely off-road, and anything goes with regards to distance, though I tend to prefer the longer races.  LDWA events are fab – low-key, no pressure on times, great routes through fantastic countryside and a two course meal at the end, often for little more than a fiver entry fee.

Probably my first Lyke Wake Race – at over 40 miles it was my first ‘ultra’ distance run.  Having previously only completed the 23+ miles of the Swaledale Marathon, I had no expectations so just went out and ran how I felt – which was surprisingly good once I got going!  Conditions were favourable and I felt strong as the race progressed, and I ended up being the first finisher (in the handicap – not the overall race by a long way!) coming in at just under 8h30. Something like the Aycliffe 10k – an uninspiring race route if ever there was one!  At the other end of the scale would be any of the ‘sky running’ races. I love being in the mountains and competing in such areas, but I am still scared of heights and can’t deal with the kind of exposure you come across in sky running.

I’m really pleased with the variety of events I have taken part in over the past few years, often pushing outside of my comfort zone and trying out new things.  My first mountain marathon was a big jump in terms of the kind of skills required to complete that type of event. From a road running point of view, PBs always tend to stand out – for me, I’m most proud of when I finally managed sub-23 for 5k and sub-80 for 10 miles.

Heading out into the hills with a few like-minded people (and of course the dog) for a few hours of running and taking in the views.  Sunshine, snow or mud (and plenty of it) all add to the fun!

Boring, uninspiring routes or any kind of mass participation event where there’s no room to manoeuvre – although, having said that, I would like to give London a go one day…

Joining your local running club will give you the support and encouragement of other runners of all abilities, plus a range of sessions which will help to mix up and bring on your running.  Specifically for new members of Quakers, do try out some of the main sessions – don’t feel that you’re not fast or experienced enough to do them, as this really isn’t the case. Also, don’t try to do too much at once – it’s so easy to get carried away and want to do every race going, but it’s then all too easy to pick up an injury.  Listen to your body and make sure to incorporate plenty of rest and recovery time into your week.

Sheer determination usually!  Some of the longer / hillier events can prove to be a real mental battle at times when you’re struggling but know that you’ve still got hours to go before you’ll reach the finish, but these periods usually pass and then you’re pleased you just gritted your teeth and got on with it rather than giving up.  Doing sums (working out pacing etc) can keep me occupied for a while too!

Starting out at your local parkrun is a great way of experiencing running within a group of people – it’s a very relaxed and welcoming atmosphere, but with the events being timed, you can ‘race’ the route and see how you progress. If I’ve been on the go for several hours, then lying on the floor with my legs up a wall!  Otherwise heading to the pub for a few drinks and a nice bit of grub usually does the trick.

My 10k PB from six years ago is 50.04 – it was very frustrating not to dip under the 50 minute mark, and I didn’t manage to complete another 10k race while I was still fit.  I’m sure I’m capable of getting a minute or two under that, and if everything went perfectly then maybe a little more towards 45 minutes – though that may be a little optimistic!  (And if it’s in the six months from now, anywhere near 50 minutes would be amazing!)

Off-road races don’t tend to do goodie bags as a rule, though it’s often real ale or a bottle of wine when they do, which suits me fine!

← Member Spotlight, July 2018 – Sarah Watson Member Spotlight, September 2018 – Danny Gordon →
We use cookies on our website to give you the most relevant experience by remembering your preferences and repeat visits. By clicking “Accept All”, you consent to the use of ALL the cookies. However, you may visit "Cookie Settings" to provide a controlled consent.
Cookie SettingsAccept All
Manage consent