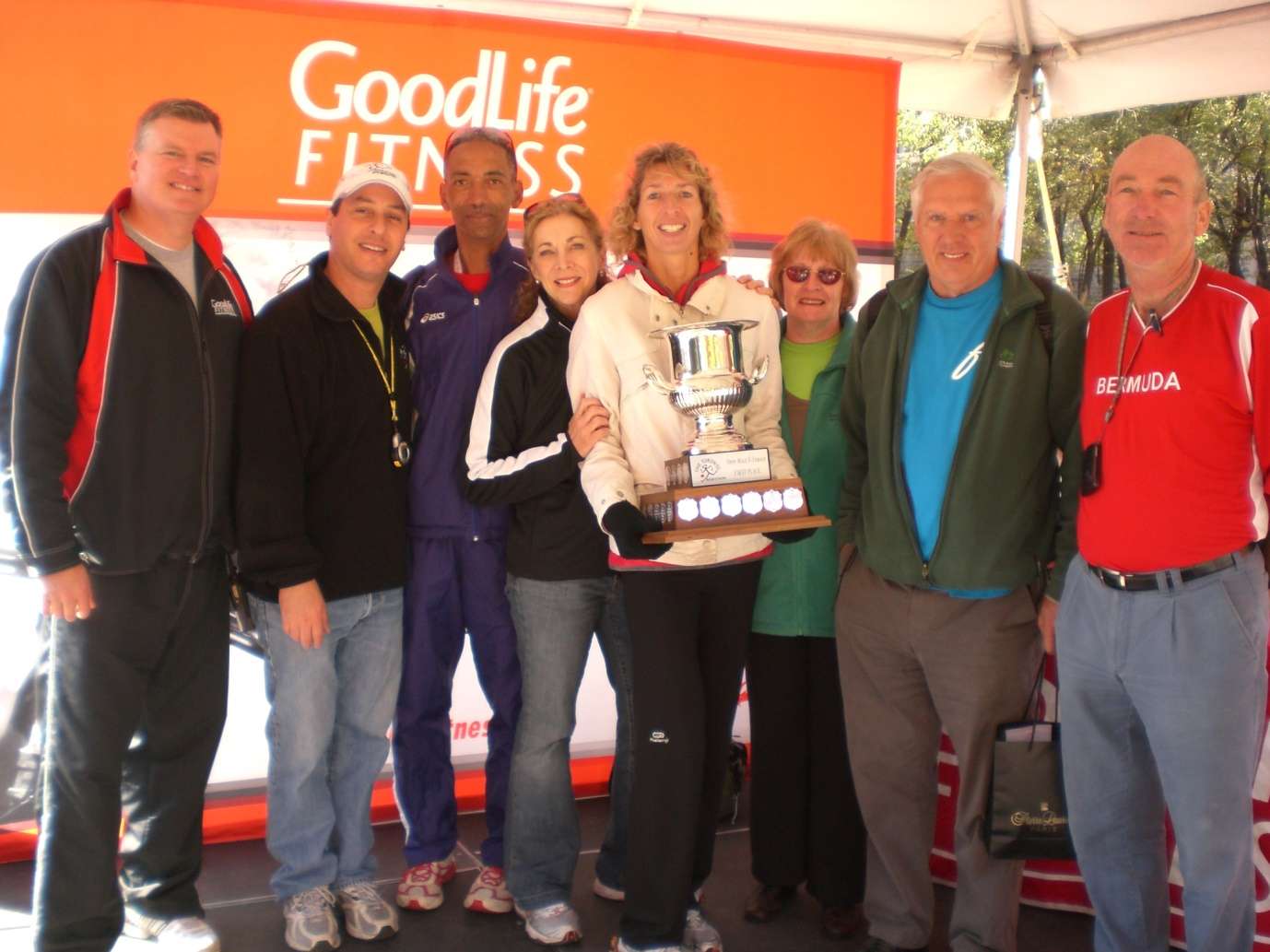 One of the Quaker’s longest-standing members, Dawn has probably won more prizes than any other Quaker, or just possibly more than all other Quakers put together.  She takes us through a very brief history of her life as a runner.

1. How did you get into running and why?
I was made to run at school and that’s the reason why I hate it.  I just happen to have a small talent and until it is taken away from me, I’ll continue to run!

2. What kept you going when you first started running?
Mrs Lake my PE teacher!!!  I hated cross country at school and my Mom wrote Mrs Lake a letter saying that I wouldn’t be doing Cross Country anymore.  I was hauled into the teacher’s office, given a good talking to and the next day I was back out running around the school field in the snow before school started!!! My teachers always favoured the girls that did hockey and netball but I do wonder if Mrs Lake ever saw my results in the newspaper and made the connection it was me!

3. How much training do you typically do each week?
I train every day quite often twice – all depends on how much cake I’ve eaten in the day.

4. Be honest, do you enjoy training?
Yes I enjoy training.  Some stuff is more enjoyable than others.  I love going for a run with Katherine Hackett, Steve Snook, Wayne Bramley and Dave McLachlan.  We all go back decades and it’s nice to catch up

5. Do you do any other sports or fitness activities?
I cycle, swim, go to the gym, spin, body balance, grit cardio, grit strength, metafit, blaze, to name but a few!

6. Do you manage to fit in any other hobbies?
Not really although I do have a tendency for crazy holidays such as a first ascent on a mountain in the Himalayas; climbed the highest active volcano in the world; trekked across Ethiopia.  Our next one is trekking in Tajikistan.  I started embroidering a Peter Rabbit which was supposed to be ready for the birth of my new cousin.  Baby Finley is nearly 2 years old and it’s nowhere near finished – it’s become a bit of a joke!!!

7. Tell us about some of the races that you’ve done in the past
I think my highlights have been running Comrades double marathon in South Africa; winning Toronto marathon, and completing an Ironman distance triathlon.  All of which I would totally recommend.

8. What’s your current running goal?
Just to get through marathon training for London in April.  I’m not convinced it will happen but I’m trying to think outside the box with regards to training plans and self-maintenance!!!

9. What are your longer term running goals?
To retire!!  I need a marathon to couch potato training plan!  How do we wean ourselves off the endorphins???

10. What is your favourite race/distance/terrain?
I’m not speed merchant so I enjoy the longer stuff.  I love being off road and getting dirty.

11. What are your proudest running achievements?
Getting up on a morning to run is an achievement!  I only discovered the other year that I broke the course record when I won Toronto marathon.  They have now changed the course so my record will always stand.  Doing my Ironman distance triathlon was the toughest thing I’ve ever trained for.  Richard Hughes coached me through that and set my training plans.  I used to have 2 dinners in the same night – my appetite went through the roof J.   I was also fortunate enough to compete in the Americas Masters Games in Vancouver.  I won gold in the half marathon but was last by a country mile in the 400 metres!!

12. Anything in your running experience you regret?
Yes – running over 45 marathons.  Doing a few is quite sufficient.  I’m very conscious of the damage I’ve done to my body and I still want to go hiking when I’m 60.  I’ve kept the club’s news reports to remind me when I’m older why I will have plastic knees and hips!

13. How many pairs of trainers/ running shoes do you have and do you have a favourite pair?
I only have one pair – I have dodgy sized feet.  The same pair that I run in is the same pair I do the gardening in.  They do get washed frequently though!

14. What’s your idea of running heaven?
Running in Bermuda or Vancouver Island with my best pal Victoria.

15. What’s your idea of running hell?
There isn’t one!  I’m always grateful that I’ve got my health and that I’m able to train, even if I’m injured and can’t run I can still cross train.  I remember when I ran New York marathon a spectator shouted at me “not everyone can do this”.  It has remained one of my mantras – I have a few! Dawn with her trophy for winning the Toronto marathon. The lady to her left in the black and white jacket is Kathrine Switzer, the first woman to formally run a marathon and who was responsible for bringing the woman’s marathon into the Olympics.

16. What is the best piece of running advice you’ve ever been given?
There’s been lots over the years I’m sure, but one thing that sticks in my head is a thing my coach in Bermuda used to make me do.  When doing hill reps, at the top push on for a further 100 metres.  It breaks your competitor!

17. Any advice to newcomers to running?
Don’t do too many marathons!

18. What keeps you going when the going gets tough in a hard race?
Cake!

19. How do you relax/reward yourself after a race?
I don’t have time to relax, but I do look forward to going to bed on a night time!

20. If you could run anywhere in the world, where would it be?
Vancouver Island.  The views, the water, the terrain!

← Member Spotlight, January 2019 - Danny Orton Member Spotlight, March 2019 - Michelle Scruby →
We use cookies on our website to give you the most relevant experience by remembering your preferences and repeat visits. By clicking “Accept All”, you consent to the use of ALL the cookies. However, you may visit "Cookie Settings" to provide a controlled consent.
Cookie SettingsAccept All
Manage consent