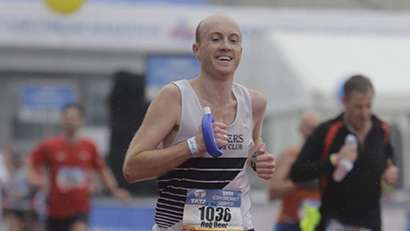 Cross country and clean legs! How does he do it?

For a bet! My dad said he’d pay for my entry fee into the 2002 Great North Run, but I’d have to pay it back if he beat me. I trained for about five months, as I’d never run before, and on the day just sneaked under the two hour mark. For several years, I tended to just run during the summer, and train for the home 10K, but other than that it wasn’t something I really took seriously. It was only when I got into the 2010 London Marathon that I had to up the training. Once I’d completed that race, I knew I wanted to keep on running, as I was the fittest I’d been up to that point, but knew I probably wouldn’t carry on, on my own, during the winter months. That’s when I started looking for a running club and the rest is history.

Knowing I’d have to pay money back!

I’ve done pretty much all distances over all terrains in the time I’ve been a member of the club. A few marathons, an ultra (all 42 miles of the Lyke Wake Challenge) and plenty of half marathons, 10K’s, 5K’s and parkruns. I’ve also done other events, such as the cross country, the track and field meets, and a lot of the team relay events (such as the Cleveland Way, the Neptune relays and Stewart Park relays). The latter are great for the camaraderie, given there’s not many team events on the calendar. He’s not smiling because he’s ahead of a harrier, he just smiles a lot in races.

I usually train between 4-5 days a week. It varies as to whether I’m training for anything in particular, but on average, the two club sessions, a midweek medium run, and then parkrun and/or a weekend long run if I’m not racing.

Apart from during those cold, dark, winter nights, yes. I never have any problem with motivating myself for training during the lighter nights. Obviously, being in the club, means you’ve always got others to train with, or work off during sessions, which always makes the  training that more enjoyable.

At the moment, I don’t really have one, other than to enjoy running. I find I enjoy it more not going for times all the time, as it can suck the fun out of it sometimes. My only other one is to try and do races I’ve never done before (of which I’m finding there are plenty!). Laughing at the end of a marathon and the photo to prove it!

The 2015 Amsterdam Marathon. The two previous marathons I’d done hadn’t gone well; I knew in my head I was capable of posting a good time but it never quite happened. The training had gone well, but I was still nervous on the day. Not long before the start, a fellow Quaker said to me “What will be, will be”, and I just thought “Yeah, it will”, which helped relax me. In the end, the race went like a dream; the 5K splits were virtually even the whole way round and I was less than a minute off running a negative split. I don’t think I’ve ever been happier at the moment of crossing a finish line, in fact I think I started laughing with about 100m to go! Knowing all the training paid off, that everything fell into place and that I’d kept on going despite the past bad runs made it all worthwhile

Pitstop 10K – when I ran it last year I remembered why I’d not done it for a while!

I have two. Amsterdam, as mentioned earlier, is one. The other occurred just three weeks later at the Heaton 10K. Trying to break forty minutes for the distance had started to become a bit of a monkey on my back. I was always within touching distance but could never quite nail it. Whether I just never believed I could do it, I don’t know, but on that day I was very close again with about a kilometre to go. Despite the nerves building because I knew it might be about to happen, I just threw everything I had left at it (which given I was just coming off the marathon wasn’t easy), and made it with just four seconds to spare. The sense of finally achieving something you’ve tried to get for so long was the most satisfying feeling. The chip timers were doing print-outs of your time, and my abiding memory is clinging onto this little piece of paper, like my life depended on it, for about an hour afterwards!

Going out running on a summer’s evening, especially if it’s an off-road run.

Any race which involves lots of laps (especially monotonous ones) or ones which go round boring courses, like industrial estates. Parkrun – not just for beginners.

My mind can easily wander, so it’s usually not hard to think of things to distract me. Most times, I find a random song which I’ve not heard for ages, gets into my head and I end up singing that for most of the way round!

Obviously, as a coach, I have to say our beginners group! Otherwise I think parkrun has been, and still is, a fantastic way for people to get into running. It gives people the chance to take part in a free event, which means anyone can do it.

Eating and drinking all the things you probably shouldn’t – this is why I like races with food afterwards!

To no-one’s surprise, a Mars Bar!!

← Member Spotlight, Apr 2017 - Diane Vaughan Member Spotlight, May 2018 – Paul Roberts →
We use cookies on our website to give you the most relevant experience by remembering your preferences and repeat visits. By clicking “Accept All”, you consent to the use of ALL the cookies. However, you may visit "Cookie Settings" to provide a controlled consent.
Cookie SettingsAccept All
Manage consent